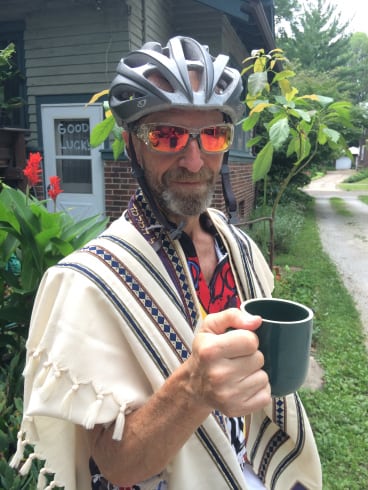 Most people aren’t ready to be diagnosed with a life threatening condition.  They live their days assuming tomorrow will be fairly similar to the day before it.  They plan for trips in the future, work towards promotions, and wonder what life will be like 10 years from now.

For Ray Spooner, his plan for the future changed dramatically when he was diagnosed with ALS last year.  Suddenly, he had a considerably shorter window of time to work with.  It didn’t take him long to realize what he wanted to try and do.

Ray wanted to bike from coast to coast across the USA.

Like millions of others, Ray participated in 2014’s Ice Bucket Challenge.  A midwife of nearly 20 years and a nurse before that, Ray had extension experience in the medical field.  He was well aware of ALS before the Ice Bucket Challenge and thought it would be a great way to make other people aware of the condition.

He never expected that just two months later, he would be start to show symptoms for the very same condition.

Initially, Ray thought the symptoms might be due to nerve compression caused by his years of heavy cycling.  But after a few visits to a neurologist, the test results were clear.  Ray had ALS.

Though he was shocked Ray started thinking immediately of what he’d still like to accomplish with his life.  He had been married for 32 to years and had three great children and a beautiful new grandchild.   During his career as a midwife, he had delivered over 2000 babies.  He had lived a full life.

So he decided there were three things he wanted to do.  Spend as much time with his family as he could.  Have a Bar Mitzvah.

And take a bike ride….across the entire US.

Ray Goes for a Little Ride

One thing Ray was immensely impressed by was the support network he was connected to after his diagnosis.  Through the Muscular Dystrophy Associate, Ray was given speech support and physical therapy and was put in contact with many others experiencing the same thing he was.

Over 30,000 Americans have been diagnosed with ALS.

Ray wanted to raise money to donate back to the organization that was giving him so much help.  Being a lifelong biker, Ray decided he could pursue one of his dreams while also raising money for a great cause.  So he mapped out a 3000 mile journey from the west coast to the east.

This ride, however, would be the most challenging not only because of the distance, but because the effects of ALS were already setting in.  Ray has lost function in his left arm, and the rests of his left side is following.

To deal with this, he has his left hand braced to the handlebar to hold it in place.

Still there are many risks ahead.  A bike trip like this is dangerous for anyone.  In Ray’s case, a rough bump in the road could toss him straight from his bike.  But he’s not deterred.  To this point, he’s already raised over $38,000 for his cause and plans to keep going as long as he can.

To follow his progress and learn how you can get involved, visit his blog here.  You can even start your own bike ride in honor of Ray and those who have ALS or muscular dystrophy.

Rollx Vans, a nationwide manufacturer and distributor of wheelchair vans, partners with Organizations such as Muscular Dystrophy Associations (MDA) to raise awareness and funding for conditions like ALS and muscular dystrophy.

What do you think of Ray’s trip?  Have you ever wanted to bike across the US?