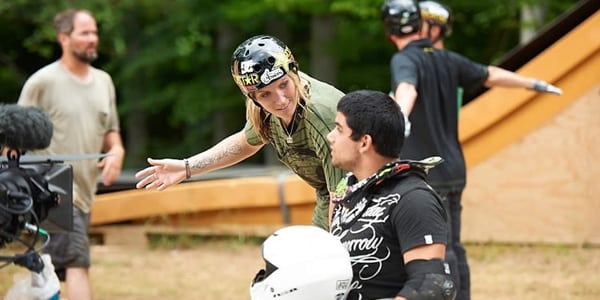 If you like to see ordinary men (and women) risk their lives in death defying jumps, flips, stunts, and tricks, then you would most likely love Nitro Circus.

Created by X-Games superstar Travis Pastrana, Nitro Circus is a traveling collective of daredevils who do everything from base jumping off high rise apartments to riding specialized tricycles through flaming loops and more.

The Heart of the Group

Aaron “Wheelz” Fotheringham was born with spina bifida.  As a child, he would go between crutches and a wheelchair until age 8 when he began using a wheelchair fulltime.  At the time, it wasn’t too big of a deal as he found it easier to move around in the wheelchair anyone.

In his wheelchair, he would go to places like the skate park where he would watch his brother do BMX tricks.  One day, his brother told him to go on the ramps in his chair.  From that moment forward, Aaron was hooked.

Eventually he upgraded to a special chair that’s incredibly light and maneuverable, but also able to take a beating.  Aaron has almost singlehandedly pioneered the idea of “extreme wheelchair stunts”.  At the age of 14, he was the first person to ever to a back flip in a wheelchair.  Four years later, he would become the first person to ever successfully pull off a double back flip.

He was also the first to complete a front flip in a wheelchair, a much more difficult stunt to pull off.

Eventually, his crazy antics got him noticed by the people behind Nitro Circus.  They eagerly asked him to join.  What impressed them even more than his ability to pull of amazing stunts was his genuine heart and positive attitude.

Aaron is an incredibly friendly and driven person who sees his chair not as a limitation, but a very important part of who he is.

To see Aaron in action, click on the video below or check for a Nitro Circus performance coming near you.