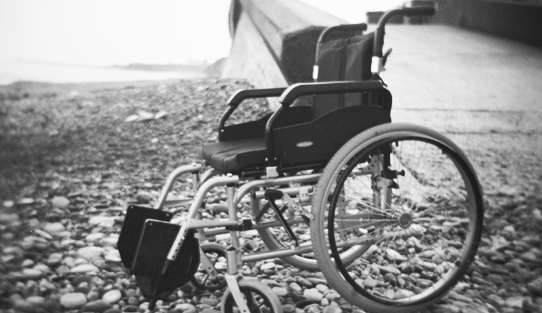 Donna McCormick is a giver.  From the moment she was diagnosed with MS, she decided to help people just like her.  This started with teaching them yoga.  For people suffering from disabilities (particularly degenerative ones), yoga is a great way to keep strength and flexibility.

Even after losing her ability to walk independently, Donna continued to teach for as long as her body would allow.  Finally, she was unable to keep practicing and teaching.  That didn’t stop her from continuing to help others, though.  She became a political activist, lobbying for others with disabilities.

Now, after seventeen years of giving and helping, Donna is experiencing the blessings of generosity.  The organization Ability Found has chosen Donna as the recipient of a power wheelchair, a manual wheelchair, and accessibility modifications to her home.

And all of this is for free.

Up until now, Donna has relied on a walker to get around.  Though she is very active, it has proved to be a constant struggle, consuming most of her energy by mid-day.  Now, she will be much better equipped to serve and socialize for her cause.  It will also be much easier to relax at home.

Without the generosity of Ability Found, Donna would have never been able to afford the equipment she has now been given.  It’s great to see someone who has given so much get a little something in return.  Thanks to this unexpected kindness, Donna McCormick has regained some independence.

Ability Found is a nonprofit organization providing wheelchairs and assistive equipment to people with disabilities since 1993.  There focus is on people just like Donna who are unable to afford the expensive equipment their conditions often require.