Accessible Sailing Made Possible with Technology
Skip to content 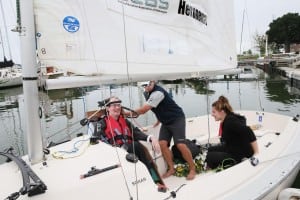 On Friday, September 4, a man who has dealt with Lou Gehrig’s disease went sailing for the first time in ten years by himself. Steve Heronemus has had his physical disability for a decade, but thanks to new technology, he was able to control the boat himself, despite having only the use of his jaw and one finger. The 55-year-old Wisconsin native was able to control his 24-foot sailboat for around four hours on Lake Michigan.

The sailboat was equipped with a special bite tube that allowed Heronemus to use his mouth to control the boat. With the bite tube as his steering wheel, he was able to direct the ship’s rudder without any issues. He used his finger to control the sails, trimming them when needed via a power winch.

The entire process was similar to how one might drive one of our wheelchair vans for sale that are available but still want the freedom they crave. While most people simply want to be independent enough to go to the store or the doctor on their own, Heronemus wanted more. He loved to sail before his diagnosis with ALS, and the dream of returning to his hobby became a reality with his new accessible sailboat.

Some people may wonder why anyone would create an accessible sailboat. After all, a serious storm could have capsized Heronemus, leaving him facing the very real possibility of drowning. But for him, the chance to sail again was worth the risk. The very act of going out on a boat on his own gave him a major boost to his self-confidence, a boost he and those who worked with him on the project believe that others who have ALS could use.

There are over 55 million people in the US with some kind of physical disability, and many of them also face depression and anxiety due to what they perceive as a severe handicap. By showing them that they can still do things like steer a sailboat, they can begin working through their depression and see that there’s very little they can’t do.

The Technology behind the Boat

Heronemus’ sailboat was built through a collaboration of several organizations. The Sailing Education Association of Sheboygan (SEAS), Wisconsin, served as the project manager. They brought in Harken Inc, a manufacturer of sailing equipment, to work on the ship’s controls. Other companies such as Bemis Manufacturing Co. worked on building the boat and the special features that it would need. That included a handcrafted control chair, the bite controls, and other electronics. Improvements were made right up until launch time.

The Future of Accessible Sailboats

SEAS and their partners don’t plan on this test voyage to be the end of the project. Now that they have proof that the technology works, they plan on building upon it. Future improvements include wireless Bluetooth controls and an adaptable system that can easily be customized for the operator. SEAS has previously worked with blind sailors and hosted a 2014 blind world championship race.