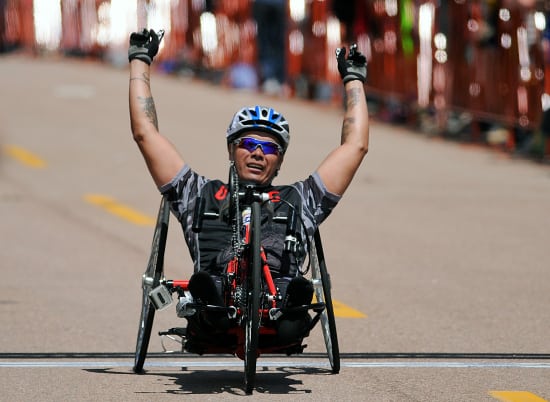 Get your wheelchair accessible vehicles ready… the Warrior Games are almost here!

The Warrior Games team Air Force completed a week-long training camp on August 8, in preparation for the upcoming event.

Members of the team trained at the U.S. Air Force Academy, Fort Carson and at the U.S. Olympic Training Center. This included approximately 40 athletes that were hand selected to train and ultimately compete in the games.

Additionally, 22 of these athletes will be selected to participate as part of the 103 person team, consisting of wounded warriors from all areas of the Defense Department, for the Invictus Games happening September 10-14, 2014, in London.

The Wounded Warrior program and the United States Olympic Committee come together once each year to present the Warrior Games.

This year’s games are happening Sept. 28-Oct. 4, 2014, in Colorado Springs, Colorado. They will be hosted at the U.S. Olympic Training Center and the Air Force Academy.

The games consist of more than 200 wounded, ill and injured service members and veterans competing in teams based on their branch of service. The five teams include Army, Navy/Coast Guard, Air Force, Marine Corps, and Special Operations.

Athletes participate in competitions for seven adaptive sports including archery, basketball, shooting, cycling, volleyball, swimming, and track & field. This opportunity will allow athletes to prove they can work their way through challenges and still come out and compete.

Want more information about this year’s games or the games in general? Visit the U.S. Paralympics website and watch our blog for additional game updates to learn more.

Have you watched the games in year’s past? What do you think of them? Given the opportunity, would you participate in the games? Why or why not? Comment below to join the Warrior Games conversation!