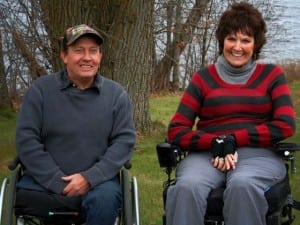 Despite the number of Guinness Book World Records there are in existence, breaking one of them is not an easy task. That’s part of what makes them so special to hold.   You’re up against the world, and you have to be the best or try the hardest if you want to win the title.

That wasn’t enough to stop Myrna Peterson and Lee Isaacs from setting out to claim a World Record, despite the fact that the previous record holder was Superman himself.

Up Against the World

Peterson and Isaacs friendship is one of an unlikely coincidence. On Jun 21, 1995, the two of them experienced life-altering accidents less than a half a mile apart from each other. Both were told shortly after that they would never walk again.

Over the years, the two formed a common bond. From their friendship came an idea: what if they gathered other wheelchair users together to break a world record?

So this past spring, they set out to set the record for the longest line of moving wheelchairs. The thing was, the previous title holder was none other than Christopher Reeves, a man best known for playing Superman and for founding one of the most publicly known disabilities-related organizations in the world.

That didn’t deter them, though.

Christopher Reeves had managed to gather 192 wheelchair users to form a continuous line in 2010. While that’s quite a large number, there were confident in their ability to top it.

Raising the Bar a Little Higher

Just weeks before their event (dubbed MyrnaLee Mania) was scheduled to happen, the pair learned that Reeves record had already been topped early this year by 247 New Zealanders.

But they had come too far to quit now. So, on May 16th as originally planned, they held their event. People came from all over, arriving in their cars, chairs, new wheelchair vans, and on foot to participate in the festivities. When it was all said and done, they gathered 351 people to form their line, smashing both previous records.

They have since made a formal submission to Guinness and are currently awaiting the official reply. However, from all accounts, it appears they will be the new record holders.

Gathering for Something Greater

Of course, MyrnaLee Mania wasn’t really about breaking the World Record. Though they used it as extra motivation, the real purpose of the event was to raise awareness and funds for accessibility updates needed in Grand Rapids, MN. These include sidewalk cut-aways, fading paint on handicap spots, elevator buttons out of reach for wheelchair users, public park issues, and more.

For more information about their event and cause, check out their website here.

Have you ever wanted to break a world record?  Which one?