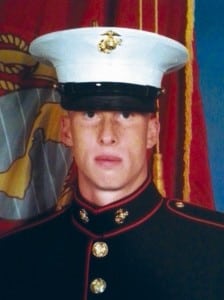 Mark Litynski was still a newlywed when he was deployed in Afghanistan with his fellow Marines. It was a tour that would forever change his life. In November of 2010, Mark stepped on a hidden IED (improvised explosive device), causing it to erupt beneath him.

Though his life was spared, the blast took both of his legs and his left arm, as well as causing severe damage to his lower torso. Since then, Mark has undergone extensive surgeries and rehabilitations while also learning how to build a life together with his wife, Heather.

And while Heather and Mark’s first years of marriage have experienced more extreme circumstances than most, they still have the same goals as any other young, married couple.

For example, finding a house to raise a family in.

Building a Place to Call Home

Finding a home that could accommodate Mark’s needs to be tricky. After all, most homes aren’t designed with accessibility in mind. Thankfully for the Litynski’s, an 2013, an organization called Building Homes for America’s Bravest connected with them about building them a home instead.

But not just any home.

They would design and build a “smart home”, specially created to not only be accessible from the outside, but easier to utilize on the inside as well. Two years later, Mark and Heather’s new home is finished, and they have finally moved into a place where they can start their family together.

Located near Duluth, MN, the new home sits on a 45-acre wooded tract. The house is one level with easy wheelchair access. Inside, the counters can be raised and lowered hallways and doorways are wider than average to better accommodate Mark when he’s in his wheelchair. In addition, the lights, heating, and air-conditioning can be controlled from an iPad.

About Building for America’s Bravest

Building for America’s Bravest (BFAB) is the result of a partnership between the Gary Sinise Foundation and Stephen Siller Tunnel to Towers Foundation. BFAB builds smart homes for those who have been seriously injured in the line of duty. They are able to do so through donations, fundraisers, government funding, and various grants.

All smart homes carry similar features to the Litynski’s home.

If you would like to learn more about the BFAB program, what it does, and how you can help, check out their website here.

At Rollx Vans, a distributor of handicap vans, Chicago to Texas and across the rest of America, we have a great appreciation for our veterans. As the Fourth of July approaches, we’d like to extend a special thank you to all who have served, as well as to organizations like BFAB that dedicate so much to helping those who have been injured in the line of duty.

What are your thoughts on the Litynski’s new home? Do you have any specific veterans you’d like to thank? Share below!