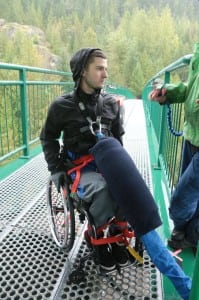 A 21-year-old man, Riley Martin, recently made a bungee jump leap off a 170-foot bridge in Whistler, British Columbia, to raise awareness for disabilities. So, what’s special about this, you ask? The college student made the fall while in his wheelchair.

Riley Martin has been without the use of his legs for the past four years, since a motorcycle accident left him paralyzed. But, he still hasn’t lost that need for a daredevil-like adrenaline rush.

After a friend showed him a video of Paralympian Rick Hansen bungee jumping, he knew he had to give it a go.

Riley told ABC News, “I called the guys in Whistler to make an appointment and mentioned at the end that I was in a wheelchair and they said, ‘Oh, great. We’ll get the wheelchair harness for you’ and that’s all it was.” It was a surprisingly easy process.

Although, Riley did also mention in a post on Reddit that he did something that truly scared him. Accompanying the images of his free fall on Imgur, he wrote, “The guys that helped strap me in made me even more nervous with all their ‘jokes’ about not having done a wheelchair for long enough that they’d forgotten how to set it all up…”

Riley was all smiles for pictures after his jump and told ABC News, “It was a good feeling that I was still able to do it, just the same as able-bodied people.”

You can watch the video of Riley bungee jumping here:

What do you think of this inspirational leap of faith? Do you know anyone who ever has or would try something like this?

Join the conversation in the comments below!