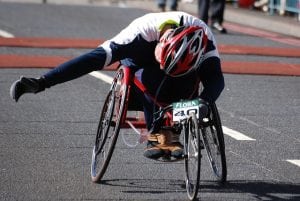 When most people think about the Boston Marathon they likely associate it with the thousands of able-bodied runners that take to the streets of the historic city. What they may not realize is it’s also one of the largest wheelchair race events, as well.

This year’s men’s wheelchair race was as close to a three-way finish as it could get. With a time of 1:24:06, Switzerland’s Marcel Hug (defending champion), South Africa’s Ernst van Dyk and Australia’s Kurt Fearnley literally gave spectators a photo finish. In the end, Marcel Hug took the win with less than a chair’s length between himself and the next two finishers.

For the women’s wheelchair race, American Tatyana McFadden enjoyed a 74-second victory (a lead large enough that she was able to take her hands off her chair to acknowledge the screaming fans) and took home her fourth consecutive championship title.

The wheelchair division of the B.A.A. Boston Marathon has a long and storied history with it’s beginnings pointing back to 1970, when a Vietnam War veteran, Eugene Roberts, became the first person to complete the race using a wheelchair.

While he was not permitted as an official racer, he completed the 26-mile course in just over 6 hours. And, just five years later, wheelchair racers got their chance to enter the race after Bob Hall completed the race in just under three hours.

Since that day in 1975, the wheelchair division has been a long-standing piece of history tied to this prestigious race. And, our handicap van sales and manufacturing teams at Rollx Vans has been following the action ever since.

Do you follow wheelchair racing? Which races are your favorites to watch? Which athletes do you regularly root for? Comment below to join the conversation!