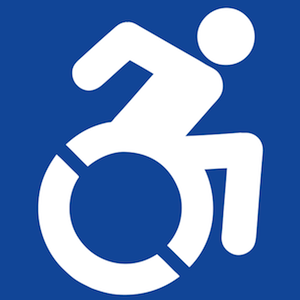 Anyone driving their wheelchair van in the state of Connecticut will soon see some changes to accessible parking spaces.

The Constitution State officially started off 2017 with new legislation mandating that all the state’s accessibility signs will have to be updated to the new, more modern symbol that was unveiled two years ago.

The law took effect on January 1st and will replace the decades old signs that people have come to recognize for so many years (45, to be exact).

An Early Adopter, But Not the First

Although Connecticut is one of the first states to pass legislation that switches out the older signs, they are not the first state to do so. The State of New York was quick to adopt the new signs in 2014, shortly after the designs were unveiled in 2013. Governor Andrew Cuomo signed the bill into law, and New Yorkers have been using the signs ever since.

The Origins of the New Symbol

The new accessibility symbol came about with the help of organizations like the Accessible Icon Project, a Boston-based group with the goal of changing how society views people with disabilities.

To them, the new symbol showcases that people with disabilities can be independent, active members of society.

New, But Not Without Controversy

Although the original signs were seen as controversial — some viewed them as depicting wheelchair users as too sedentary — the new signs are not without a bit of controversy of their own.

Some disability advocates have come out against the new signs, saying that the more active stick figure is exclusive of people who do not push their own wheelchairs.

Residents won’t be seeing the signs pop up immediately, but they will be implemented on all new and reconstruction projects moving forward. This is a tactic used by New York to save the state money on having to replace the signs statewide.

What do you think of the new accessibility symbol. Does it more accurately represent wheelchair users, or was it an unnecessary change? Join the conversation by commenting below!