Cruise Control for Wheelchairs? This Device Makes it Possible
Skip to content 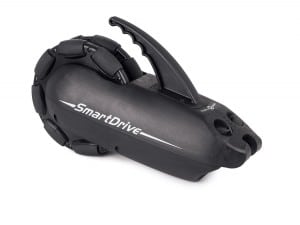 Wheelchair accessible vans have cruise control settings, so why shouldn’t people’s personal wheelchairs have them, as well?

That’s exactly what the Smart-Drive MX2 provides to the wheelchair using community. The new device, created by Max Mobility, has just received approval from the FDA in August and is now ready to be purchased by consumers.

A Great Alternative to Power Wheelchairs

It’s true that power wheelchairs have been readily available for more than a few decades, and they do serve as a great way for the wheelchair using community to get around, but they are often bulky and hard to maneuver in tight quarters.

Sometimes it really is easier for a person to use their standard wheelchair, but even that presents a few difficulties. When travelling long distances throughout the course of a day, not to mention tackling the occasional steep incline, a person’s arms can begin to feel like jelly.

People in wheelchairs are, after all. moving around more than their own body weight.

The MX2 device offers a new alternative to using power wheelchairs, and it can allow users to climb hills, travel long distances and move over rough terrain with ease.

Getting to Know the MX2

The device weighs in at around twelve and a half pounds and has a 250 W Brushless DC motor, which is powered by a LiFePO4 – 36 V & 3.4 Ah battery. Overall, the device has a range of about twelve miles and can travel at speeds between 0.5 – 5.5 mph.

When connected to a standard wheelchair, the MX2 employs push activated cruise control that matches the last known speed of the chair. Wheelchair users can gently press the wheels forward and set the device to maintain a very slow roll or spin their wheels faster to maintain a steady cruising pace.

In order to stop the chair, users only need to tap their brakes to deactivate the device, exactly as you would when operating the cruise control setting of a vehicle.

In addition to its primary function, the MX2 also comes equipped with bluetooth capabilities, which will allow for smartphones to be connected to the device.

Check out the MX2 in action in the video below.

What do you think of the MX2? Let us know in the comments below!