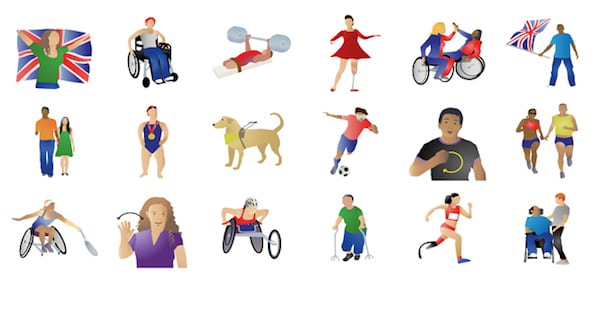 Whether you love emojis or roll your eyes at them, they are here to stay. And since they are going to be around for the foreseeable future, shouldn’t they be inclusive of people with disabilities?

At least one disability advocacy group certainly thinks so.

The Start of a New Trend

Scope, a London based group that focuses on inclusivity and accessibility for people with disabilities has created a line of icons that they hope will one day become adapted as real, usable emojis.

The icons, which for now remain just JPEG images, feature a wide range of people from the disability community. They have created everything from men and women in racing wheelchairs to people playing wheelchair tennis, weightlifting and running with prostheses.

They even have a cute little guide dog, too.

Take a look at some of the images below. There are 18 in total.

Just in Time for the Olympics

These sports-related icons are just in time for the 2016 Rio Paralympics, which is set to begin on September 7th. They were originally created to celebrate World Emoji Day, which was last Sunday, July 17th.

Although these are officially emojis (you won’t see them popping up as you type, yet), you can still download them and share them with your family, friends and the entire community. They can be individually downloaded from Scope’s website.

As of now, there is only one emoji for the disability community (the world famous blue wheelchair user), and many Twitter users believe that this isn’t enough, according to Scope.

The emoji campaign manager, Rosemary Frazer says on their website:

“As a wheelchair user, I’m shocked by the lack of imagination. This one symbol can’t represent me and the disabled people I know. To truly represent the world we live in, disabled people should be included in a way that reflects the diversity of our lives.”

We at Rollx Vans wish them the best of luck, and we encourage all our followers to share these images in hopes of having them transformed into genuine emojis. Maybe one day we will even have an emoji made that depicts one of our accessible vans!

What do you think of Scope’s emojis? Are there any accessible sports that you would like to see created into an image? Join the conversation by commenting below!