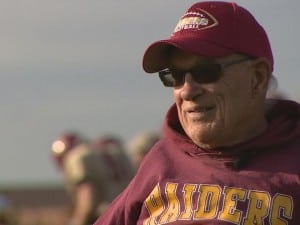 When Larry Sanftner was in high school, he dreamed of being on the high school football team.  While this dream isn’t uncommon for a high school boy, Larry’s particular situation was.  Larry had been born without a right arm.  As for his left arm, it was about half the size it should have been for a man his height.

Nevertheless, he approached the football coach about getting a spot on the team.  The coach informed him that the only way Larry would be on the team is if he could kick a 50 yard field goal.

So Larry learned how to kick a 50-yard field goal, and true to his word, the coach placed him on the team as their kicker.  That was over 50 years ago.  Between then and now, Larry was involved in a hunting accident where he was mistaken for a bear by a fellow hunter.

It was an event that took a bit of a toll on Larry.  After all, his strength and mobility was in his legs.  Now, he would have to transition to a life of wheelchair use and wheelchair accessible vans to get around.  But just like he didn’t let a missing arm keep him off the football team, Larry wasn’t going to let the loss of his leg keep him from living his life.  Six weeks after the accident, he returned to working and raising his family just as he had been doing before.

That alone is a pretty great story.  But Larry wasn’t done yet.

One day, Larry was walking his dog past the high school in Northfield, MN, when he stopped to talk to the current coach, Bubba Sullivan.  After reminiscing about his football career from decades earlier, Larry was asked a surprising question.

Coach Sullivan asked him if he wanted to be the kicking coach for the Northfield Raiders.  Larry graciously accepted.  Though he was incapable of still kicking a football, he remembered how it should be done.

Working side by side with the players, he was able to observe and correct form, pushing them to a new level just like he had done with himself in high school.  And for nearly 20 years now, he’s been pretty successful.  This season, Northfield Raider’s kicker Isaac Stadler broke the 28 year-old state record for most field goals scored in a game.

But it isn’t just good form that Larry is bringing to the field; he also provides a source of inspiration and a positive atmosphere.

Larry, now 73, considers himself to be a very lucky man.  “I got my speech, I got my hearing, and I got my eyesight,” said Larry in a recent interview.   And he’s got a winning football team that he loves.

For Larry, that’s all he really needs.

What’s your favorite part of Larry’s story?  Share your thoughts below!