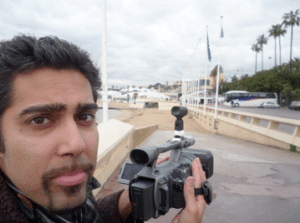 With the 87th Academy Awards set to kick off, we decided to put the spotlight on a filmmaker that has been making great strides within both the Multiple Sclerosis and documentary film communities.

In 2006, Jason DaSilva set out on a fun-filled trip to the beach with his family. As a seasoned documentary filmmaker, DaSilva naturally brought his camera along to capture the festivities.

What he got on camera was a life changing event.

A New Documentary Was Born

While enjoying the time with his family on the beach, DaSilva suddenly dropped to the ground and found himself unable to return to his feet. He would later be diagnosed with Multiple Sclerosis.

At 25 years of age, his life had changed completely.

Up until this point, DaSilva had often lived his life with a camera in hand, experiencing the world through the lens and getting to know his subjects by filming their lives. The result was a catalog of five short films and a full-length documentary feature, Lest We Forget.

DaSilva never would have guessed that he would become the subject of his next documentary feature, When I Walk.

On the documentary’s website, the film is described as “a life-affirming film driven by a young man’s determination to survive—and to make sense of a devastating disease through the art of cinema.” It documents the changes in DaSilva’s life as he journeys from complete freedom of movement to being limited by his degenerative disease.

DaSilva had once considered NYC to be his playground. A place where he would grab dinner with friends before jumping on the subway to enjoy the extravagant nightclubs that accompany city life.

He would soon go from a life of complete mobility to one that people with MS are all too familiar with. It is a life filled with canes, motorized chairs and van conversions.

From Director To Subject

DaSilva describes his transformation from director to subject as an arduous task, saying:

“Living your life in the present while also reflecting upon it creatively, actively editing it and putting the pieces together in real time, put me in a psychological feedback loop that was tricky to negotiate. Every night after filming and editing, I would have dreams of being able to walk; then I’d wake up unable move and start the process of filmmaking all over again.”

Where You Can See The Film

When I Walk played at the 2014 Sundance Film Festival and had showings across the country in 2014, Today, it can be viewed on Netflix’s streaming service and purchased at a number of retailers online.

What do you think of DaSilva and his film? Will you be seeing it? Let us know in the comments below.