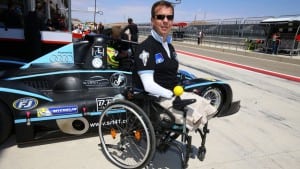 It’s even more challenging to imagine driving for 24 hours straight at 200 miles per hour in a modified race car, yet this is exactly what Frederic Sausset intends to do in the next Le Mans marathon race.

When Sausset, now 46 years old, lost both of his arms and legs due to a bacterial infection in 2012, he began to dream of competing in the world’s most prestigious marathon endurance race. With a new outlook on life, he was determined to let the loss of his limbs serve as a major driving force in his determination to compete.

More than three years later, the endurance racer is now set to compete in the iconic race next year in June. He will be driving a modified Morgan LMP2 prototype vehicle. Inside the vehicle, Sausset will operate the gas and brake pedals using controls underneath his thighs. A prosthetic arm will also be attached to him, allowing him to maneuver the car throughout the race’s overwhelming long duration.

A Race Unlike Any Other

The 24 Hours of Le Mans is the oldest active endurance sports car race. It has been held annually in France since 1923 and represents one of the three legs of motorsports “Triple Crown” (the other two being the Indianapolis 500 and the Monaco Grand Prix).

Unlike traditional races, the Le Mans marathon has no finish line. Drivers race in teams of three for 24 hours straight, with the team who travels the longest distance after time runs out winning the race.

While Sausset has already been on the podium for endurance races, Le Mans will prove to be his greatest challenge to date. Yet Sausset shows no sign of blinking despite his past.

“It’s been a long road since July 2012,” Sausset told Endurance-Info. “I had to find a meaning and future to this life.”

Sausset will become the second driver with a disability to take place in an endurance race in the past year. Last July, Alex Zanardi competed in the 24 Hours of Spa, a similar endurance race that is held every year in Belgium.

What do you think of racers like Sausset and Zanardi? Let us know in the comments below!