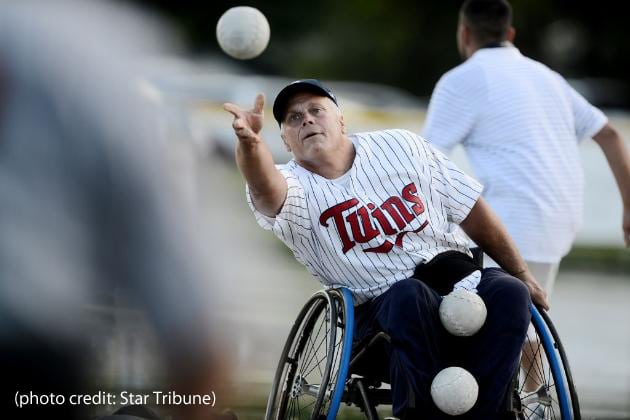 Developed by the Courage Center with the help of the Minnesota Twins, the road to building this field has not been easy.

No Field to Call Home

The Courage Center manages to softball teams: The Rolling Twins and the Junior Rolling Twins.  Since their inception, these teams have had no field to call their own.  Their “home games” have been played on various parking lots and open fields, leaving a bit to be desired.

That all changed in 2010 when the Minnesota Twins won a $200,000 grant from Pepsi to give to the charity of their choice.  The Twins chose the courage center and the construction of Todd Anderson Field began.

Before this, the closest competitive field was in Omaha.

Not that the Rolling Twins let the lack of a field get them down.  In 2011, The Rolling Twins were national champions.  They don’t plan on slowing down, especially now that they have their own field.

Todd was a well respected Minnesotan who excelled at adaptive sports.  Todd passed away in 2010 at the age of 50.  He was, at the time, vice president of Business Services at Otto Bock.  Todd left behind a legacy of helping those in need and empowering those with disabilities.