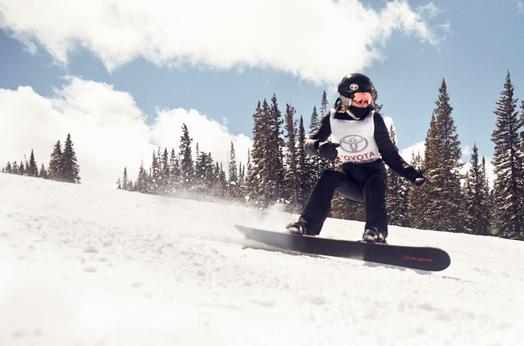 Were you one of the many millions of people that watched the Super Bowl a few weeks ago? Whether you’re a football fan or not, we all know the commercials play an important part of every annual Super Bowl.

Did you happen to see Paralympic Athlete and Dancing with the Stars finalist, Amy Purdy, featured in Toyota’s Commercial?

Amy has had the opportunity to become a Team Toyota Athlete as she starred in Toyota’s “How Great I Am” Super Bowl Ad for their 2015 Camry.

Even though the Camry has been the nation’s #1 selling car for 13 years, they decided to change things up a bit by introducing “The Bold New Camry”.

The Camry’s style is keeping it’s comfort and reliability that it’s know for, but is becoming more stylish as it goes bold and gears toward a younger look.

The commercial features Amy snowboarding and dancing paired with Muhammad Ali’s famous “How Great I Am” speech. Toyota and Amy both have the means of inspiring others to be bold no matter what and to live a bold life overall.

They followed it with the fitting hashtag #OneBoldChoice.

If you aren’t completely familiar with Amy Purdy, she has become an inspiration to many by sharing her story to people around the world.

Due to the loss of circulation from Meningococcal Meningitis, Amy had to have her legs amputated below the knee when she was 19 years old. She also ended up needing a kidney transplant, which her father was able to donate to her right before she turned 21 years old.

Amy’s life-changing situations is what led her to accomplish her goals, which is why Amy’s life is a perfect example of how to live a bold life. Hence the reason why Toyota wanted to represent her in their campaign.

Amy was later recognized for competing in the USASA National Snowboarding Championship where she won three medals. She is now known for being a world-class snowboarder and 2014 Paralympic bronze medalist.

Visit Amy’s website for her full story here and check out Amy in Toyota’s “How Great I Am” Super Bowl Commercial below!

What do you think about Toyota’s “How Great I Am” commercial? Do you think Amy should be featured for other campaign? Maybe even one for Chicago wheelchair vans or other vehicles?