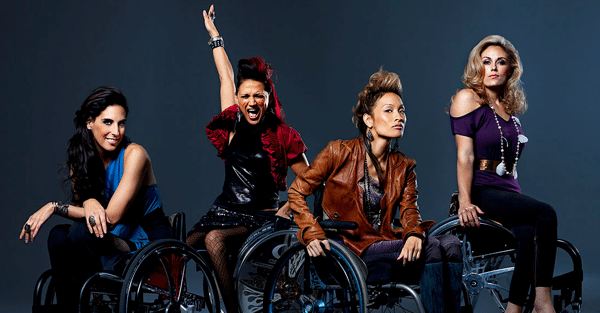 Reality TV has a bad reputation.  Not only does it tend to show the worst society has to offer, but it manipulates it look even more horrible.  Unrelated scenes are edited together, context is thrown out the window.  The people featured come off as mere caricatures of real human beings.  Their issues are there to be laughed at.  Some  would argue that many fictional shows are more accurate than these “reality” shows.

But one show is determined to change that, and so far, it’s been receiving a lot of praise.

It’s about four young, attractive women pursuing their careers such as modeling and acting.  Oh, and they’re all in wheelchairs.

Down but Not Out

Each of the women has a very unique story.  First, there is Angela.  Angela was a model/actress who had a role in The Fast and the Furious before a horrific car accident left her as a quadriplegic just a few months later.  The same car accident took the life of her good friend (and Power Rangers star) Thuy Trang.  Angela was one of the first Americans to receive stem cell treatment and managed to gain some mobility back.

The next girl is Auti Angel.  Auti was a dancer who had just finished performing with LL Cool J at the Grammy awards.  On the drive home, her car got clipped and left her without the use of her legs.  In a moment, her promising future seemed to be taken away from her.

The same is true for Tiffany Adams.  Tiffany was only 17 when she fell victim to a head on collision with a drunk driver.  Everyone was pronounced dead on scene.  Three weeks later, Tiffany woke up from a coma, a lone survivor.  She decided in that moment that she wasn’t going to give up.

Finally, there is Mia.  Unlike the rest of the cast, Mia was not involved in any accident.  Instead, Mia was instantly paralyzed when a malformation unexpectedly ruptured in her spine.   Though she became wheelchair bound, she continued to pursue her love of sports.

All four women are out to prove themselves and defy the odds the world has given them.

The show doesn’t manipulate or over-emotionalize.  Push Girls is simply a look into the lives of four people who are disabled, living out their lives in the most superficial of places: Hollywood.

‘Push Girls’ is currently airing on Sundance Channel.  The first episode is available to watch online.  For a sneak peak, watch the video below.