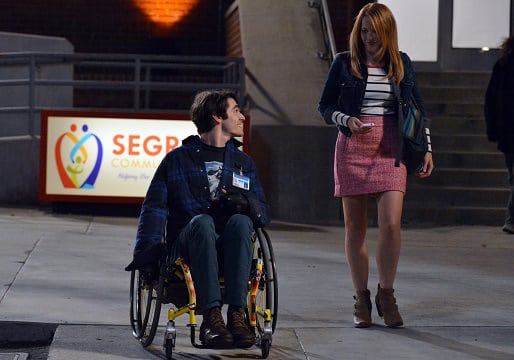 Yesterday, RJ debuted in a new role on the ABC Family drama Switched at Birth.

In this new role, RJ plays a character that’s vastly different from his role Breaking Bad. Instead of Walt Jr., now he’s playing Campbell, a pre-med student who was paralyzed during a snowboarding accident and volunteers at a free clinic.

During his initial introduction on the show he saved one of the lead characters, Daphne (a deaf character on the show played by Katie LeClerc), from being reprimanded by the clinic director. He saved Daphne for a second time later in the episode after she missed her bus home.

The scene made for a teachable moment when Daphne tried to digest the offer of a ride by asking, “like, on your lap?” He easily laughed it off with a quip of a reply, “like, in my Camaro.” While she was seemingly still confused at how someone in a wheelchair could drive, Campbell explained his hand controls while getting into the sports car and disassembling his wheelchair to fit into the backseat.

While there was already a teachable moment for RJ Mitte’s character’s disability on the show, knowing ABC Family and what they try to achieve with each of their shows, there will be more as the character interacts with other characters on the show.

According to TVLine’s interview with the show’s executive producer, Lizzy Weiss, they really want to explore two disabled characters in very different ways and who have very different relationships to their disabilities. It really excited them to pick people and see how they connect or don’t connect based on that.

And, while we’d much prefer to see Campbell in one of our handicapped vans, we’re looking forward to seeing what’s next for his character and his super cool Camaro.

What do you think of this character addition to ABC Family’s Switched at Birth? Will you watch RJ Mitte on the show? Why or why not?