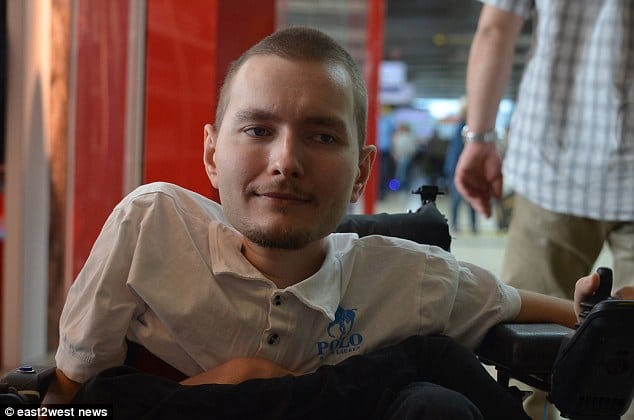 Yes, you read the title right.  Valery Spiridonov, a Russian Computer scientist is set to undergo the first human head transplant.  Surgeons will actually remove Valery’s head from his current body and reattach it to a completely different donor-body.  The hope is that the two will pair successfully, and Valery will be able to move and utilize the body as if it were his own.

Valery Spiridonov is a 30 year old Russian who suffers from a very rare condition called Werdnig-Hoffman, a type of spinal muscular atrophy that causes severe muscle and mobility issues.  This specific type is one of the most severe forms of SMA, appearing during the first few months of a child’s life.  Most children with Werdnig-Hoffman do not make it past the age of 2.

Due to his condition, Valery must use a wheelchair to move around as his muscles are severely weakened.  He is, however, able to use his hands, allowing him to not only control his wheelchair, but utilize computers for work.

He sees this operation not only as a great opportunity for himself, but a way to provide a huge medical advance to the world and help those with similar conditions to his own.

A Russian Neurosurgeon named Sergio Canavero is teaming with Chinese surgeon Ren Xiaoping and a group of other Chinese and Russian medical professionals to make this operation a reality.  Dr. Canavero has made headlines before (often controversially) for discussing the possibility of human head transplants.

He now strongly believes that by the end of 2017, the knowledge and technology needed to make this a reality will be present.  Should that happen, the operation will happen in China, tentatively during December.

Though some of the details are obviously being worked out still, the procedure is estimated to last up to 36 hours and cost $11 million.  The patient’s body and brain will be cooled to reduce neural activity and provided the surgeons with as much time as possible.

Still, they’ll have a very short window of time during the separation and attachment process.

Once the procedure is completed, Valery will be put in a month long coma where they’ll inject him with drugs to stabilize his body and prevent organ rejection.

At this point, much of this is still theoretical, not to mention quite controversial.  Ethical questions aside, many medical professionals doubt the procedure will be successful, saying the technology won’t be present, and there are too many unknown factors.

After all, organ rejection remains a serious issue in the medical world and spinal reattachment has never been completed.  Past medical procedures that have involved head transplants in dogs and monkeys have resulted in the animals becoming quadriplegic.

Preparing for the Future

With the still-hypothetical operation being at least two years away, Valery, Dr. Canavero, and the rest of the team will be busy traveling the world, presenting their plans, raising funds, researching, and figuring out the remaining to pieces of the puzzle that is the human nervous system.

Though much still remains unknown, they’re determined to make a breakthrough.

If this procedure happens, theirs is no question that the world will be watching, talking, and waiting to see what comes of it.  And we’ll be keeping you informed here at the blog of Rollx Vans, a leading manufacturer and distributor of handicap vans.

Do you think this procedure will be possible two years from now? Share your thoughts below.