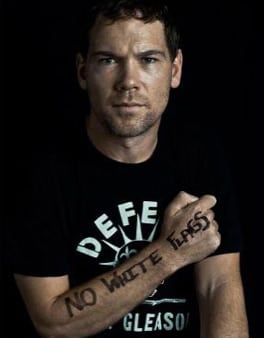 On September 25, 2006, Steve Gleason made the play of his career.  In their first home game since Hurricane Katrina ravaged their city, the New Orleans Saints faced off against the Atlanta Falcons.

Early in the first corner, the Saints had the Falcons backed into their end-zone on fourth, forcing them to punt.  Things took a dramatic turn when Steve Gleason broke through the line and made a rare punt block, knocking the football back to the ground.  The Saints recovered the loose ball and ran it in for a touchdown.

The crowd, expectedly, went crazy and the Saints went on to dominate the rest of the football game.  In fact, that season ended up being their most successful season of the history of their franchise.

Many view the moment of Steve Gleason’s punt block as the turning point for a team that endured serious hardship.  Unfortunately, when the Saints went on to win the Super Bowl just three years later, Steve wasn’t playing with them anymore.

In 2011, Steve Gleason revealed that he had Amyotrophic lateral sclerosis, more commonly known as ALS.

A Symbol of Hope

Steve Gleason’s punt block served as a symbol of hope to the city of New Orleans after Hurricane Katrina.  After learning he had ALS, Steve set out to become a symbol of hope once again to people dealt with conditions similar to his own.

He shared the behind the scenes of his day to day struggles in the documentary series “A Football Life”.  He held fundraisers to provide assistance technology and equipment to others with neuron diseases and spinal injuries.

All of this lead to the formation of the Steve Gleason Act.

What is the Steve Gleason Act?

The Steve Gleason Act is a law that would allow patients to use Medicare and Medicaid to acquire speech generating devices.

With neuron diseases such as ALS, as the muscles continue to lose functionality, speech becomes more difficult, and eventually, impossible for many.  With a speech assistance device, people who have lost the ability to speak are able to communicate effectively once again.

Currently, the Steve Gleason Act has passed the Senate and as of yesterday, the House of Representatives.  Now, it only needs to be signed by the President to become a law.

About Rollx Vans and ALS

Rollx Vans partners with organizations such as ALSA to help raise funding and awareness for ALS and other neuron conditions.  When new wheelchair vans are sold, customers can choose an organization such as ALSA for use to make a donation to.

We donate $500 of the profits from every van we sell.  With bills such as the Steve Gleason Act, the lives of those with ALS can greatly be improved.  With continued research, we hope that one day a treatment and even a cure can be found.

What do you think of the Steve Gleason Act?  Are there any other bills out there you’d like us to spotlight?