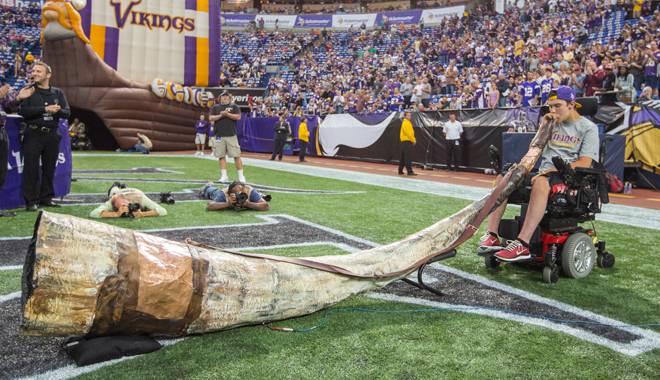 Though some might pass it off as “just a pre-season game”, Friday’s matchup between the Minnesota Vikings and the Buffalo Bills was a surprisingly eventful occasion.  On top of it being the first home game of the season, the Vikings pulled off a crushing victory and the fans carried out a 25 minute long wave that concluded with paper raining down everywhere.

But one of the greatest moments of inspiration happened before kick-off.  Sixteen year old Jack Jablonski came on to the field to blow the famous Gjallarhorn.   The fact that he could do this without assistance borders on a miracle.

The Worst News an Athlete Can Ever Hear

He probably won’t even be able to move his left arm.

It was a moment that would forever changed his life.

Jack instantly collapsed and was rushed to the hospital.  With minimal movement in his right arm and shoulders, the prognosis wasn’t good.  But a lot of people had faith in Jack Jablonski.

Famous athletes started calling Jack’s family.  Many came and visited.  People all over the country started displaying his number on shirts, Facebook accounts, bumper stickers, and more.  The number 13 was practically synonymous with Jack Jablonski.  Jack’s team went on to win the state in their division and dedicated the season to Jack.

As for Jack, he was inspired to overcome.  Soon he was showing movement in his left arm, then in his fingers, and finally, he began to regain hip movement.  He’s even managed to flex his quadriceps and move his toes a little it.

All of this was completely unexpected.  Some would even say impossible.

The horn blowing on Friday is likely to be just another item on the great list of things Jack Jablonsky will go on to achieve during his life.  In less than a year since the accident happened, Jack has touched countless people and made incredible progress.