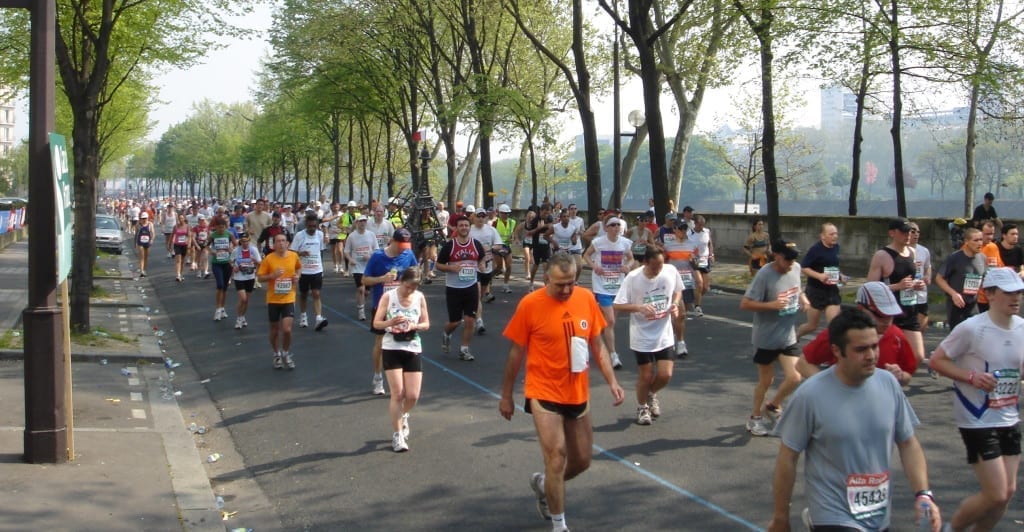 Every year, thousands of runners, walkers, and wheelchair users join together in Green Bay, Wisconsin for the Bellin 10k Run. This year, 18,213 people registered for the 38th annual Bellin Run, with two wheelchair racers who decided to turn the tables.

Jeff Pagels and B.J. Zittlow are both wheelchair users that decided to participate as a team in this year’s race. Jeff has paralysis and B.J. has cerebral palsy. They joined thousands of racers in the 6.2-mile race by one wheelchair pulling another, something that has never been done before. They were the first myTEAM Triumph team to do this.

Jeff was paralyzed from a tree falling on him 30 years ago, but he doesn’t let his disability devalue his abilities. Instead, he says, “I look at a wheelchair as an opportunity for me to be more mobile. I don’t look on it as a handicap.”

Twenty-three year old B.J. was hesitant at first about the race, but couldn’t wait to participate after Jeff took him for a ride.

As the “Angel”, Jeff had B.J.’s wheelchair attached to the back of Jeff’s handcycle so he could pull him through the entire 6.2 miles.  Pulling B.J. through the race was equal to pulling 200 pounds, but Jeff’s adventurous spirit loved the rewarding challenge as they completed the race. Jeff hopes that more people will do this in future races.

MyTeam Triumph is a non-profit organization that makes a way for disabled racers, known as the “Captain”, to participate in a race with the guidance of three runners, known as “Angels”. Their vision is “to enhance the lives of individuals with disabilities”. Their mission is “to enrich the health and well-being of individuals with disabilities by fostering lasting, authentic relationships through the teamwork environment of endurance athletics”. When you’re not looking for wheelchair vans for sale and want to get involved with myTeam Triumph, visit their website here.

About the Bellin 10k Run

The Bellin Run continues to grow since it began June 12, 1977. It was first known as the Bellin Heartwarming Run, but was changed to the Bellin 10k run the following year as it became more successful. It is now known as one of the largest 10k races, with their largest number of racers that registered being 20,000 at last year’s race.

Besides myTeam Triumph, they also incorporate other programs, such as the Corporate Challenge, High School Challenge, Kids for Running, and Back to the Crew. The Corporate Challenge is for companies within the same area to compete against each other. The High School Challenge is for high school students, staff, and faculty members competing to see who can get the most participants. Kids for Running training program is for third through eighth grade to learn the importance of staying active and healthy as they get to participate in the race together. The Back to Road Crew is condensed to 1-mile race for those who have been injured from various circumstances, such as recovering from surgery.

Bellin Run provides these programs for a fun way to encourage fitness and healthy lifestyles. For more information, visit their programs website here.