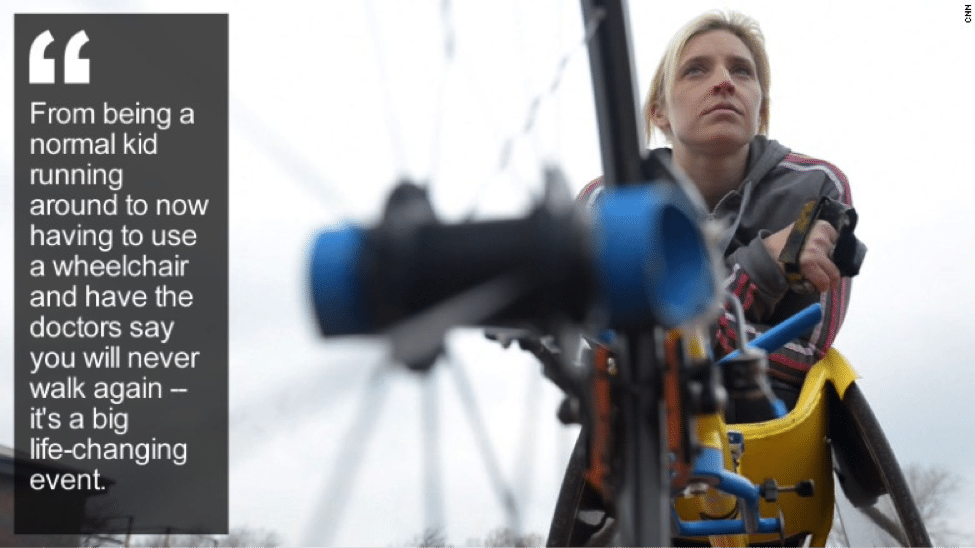 Similar to many of our Rollx Vans customers and supporters, Shelly Woods experienced a life-changing event when she was young, and she refused to let it get in the way of her aspirations of becoming a star athlete. “I quickly found that just because now I had to live life on a wheelchair I could still do all the sports I could do before, just maybe in a different way,” Woods said.

With the support of her parents, Woods tried a few different disciplines before settling on wheelchair racing. She competed in her first race, the London Marathon, at the age of 15. “I think I came last,” Woods recalled. “That was the turning point for me, that was the thing where I was like, well, I haven’t trained a lot for this race but I absolutely enjoyed it and I want to do more of it.”

Her parents weren’t able to afford much, whether it be nice racing gear or one of those state-of-the-art disabled vehicles. However, once she had discovered that wheelchair racing was her passion, Woods upgraded from an outdated, secondhand wheelchair to a high-tech, aerodynamic chair composed of aircraft aluminum and carbon wheels. Then, she was ready to compete.

Since that first race, Woods went on to win the London Marathon in the women’s wheelchair category in 2007 and 2012. In 2008, Woods earned a prestigious spot on Great Britain’s team for the Beijing Paralympics. It was there that she took silver in the 1500m, bronze in the 5000m and fourth place in the marathon. “It surpassed everything I thought I was capable of doing — I was just too happy,” says Woods. “It was a dream come true.”

When the Paralympics came to London in 2012, Woods could only imagine how special it would be to win in her home country. Sure enough, 90,000 people were waiting for her when she entered the stadium. “I didn’t know whether the public would embrace the Paralympics but they did,” explained Woods. “They didn’t care what sport it was — they just came to support and it was incredible.”

Although she had countless supporters in the audience, Woods got off to a rough start, finishing eighth in her opening event and sixth in her 1500m event. All that remained was the marathon. After an extremely close finish — only 0.2 seconds separated the first four racers — Woods was thrilled to have finished in second place. “To win that in front of my family — they didn’t come to Beijing because it was so far away — they watched me get my medal in front of Buckingham Palace and I was just so proud to be British.”

Woods competed in Australia at the beginning of the year and earned qualifying times that secure her place at October’s World Athletics Championships in Qatar. She also plans to compete in IPC Athletics Marathon World Championships on April 26, which is held in conjunction with the London Marathon. Currently, Woods is striving for a place at the Rio 2016 Paralympics. “I feel like I can do well in Rio and be really competitive,” she says. “When you are in that environment, your aim is to always be the best you can be and bring home gold medals for your country.”