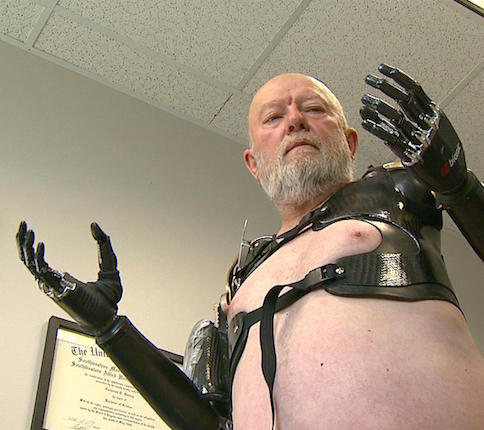 Back in the 70’s, two of the hottest shows in pop-culture were The Six Million Dollar Man and its spin off series, The Bionic Woman. The premise for both was basically the same.

The main character was in a horrible accident that damaged their body beyond what it could ever recover from. So a secret organization replaced the majority of their body with robotic (or bionic) parts, including new legs and a new arm.

Covered with a synthetic skin, these new limbs are indistinguishable from the real thing, except for the fact that they give the main characters super speed and strength of course.

In the 70s, things such as life-like robotic arms were far into the realm of science-fiction and fantasy, but that’s not the case anymore. In fact, it appears the world is very much on the edge of bionic people.

And it’s starting with a man named Les Baugh.

Les lost both of his arms in an electrical accident when he was a teenager. In the 40 years since, he’s learned to live a regular life without them. He can cook, swim, play with his dog, and even drive a car with special foot-controls.

But there are little things, Les points out, that he simply cannot do. For example, put money in a vending machine and retrieve a can of soda. That, however, could very soon change.

Now, with Les, they’ve hit another big milestone. After running a number of tests, creating a chest and shoulder mode, and giving him some training with a computer program, Les was fitted with two, full length robotic arms.

Each of these arms features the full range of motion a normal arm has and they are controlled directly by Les’s brain. However, currently, he can only move in one direction at a time. For example, to grab something in front of him, he would have to first raise his full arm, then bend his elbow, then extend his hand, rather than doing all of that in one motion.

Still, he is the first shoulder level amputee to wear and simultaneously control two prosthetic limbs.

Living in a World of Science Fiction

While it can be easy to focus on what the arms currently can’t do, the truth is, we could very well be on the brink of true synthetic limbs. As technology advances and scientists continue to learn more about the brain’s neuro-signals, we’ll continue to move towards “science-fiction” becoming a reality.

One of the researchers on the project says “…the next 5-10 years are going to bring phenomenal advancement”.

While much of the attention here is currently being directed towards robotic hands and arms, the advancements being made can eventually be applied to other prosthetics such as legs and feet.

As these advancements continue to happen, you can expect to see them featured here on the Rollx Vans blog, your resource for handicapped vehicles.

What are your thoughts on prosthetic limbs? Where do you think we’ll be five years from now?