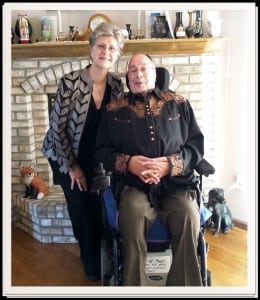 Today, our very own sales team member, Dan Delie, is taking over the blog to share a story about one of his very first customers and how that very first interaction has lasted 38 years and turned into a friendship.

One of the benefits of working at Rollx Vans is the great people we meet and the friendships we make. Mark from Minnesota is one of those friends.

Mark’s story goes back a few years, actually to 1969, when he enlisted in the US Air Force at Ellsworth Air Force Base in Rapid City, South Dakota. In 1971, Mark was sent to Thailand during the Vietnam War as a Communications Specialist, and then a year later was sent to England.

In October 1972, at 21 years old, Mark was involved in a Military accident leaving him a quadriplegic. Mark was immediately sent to Germany, then to Wright Patterson VA Hospital in Ohio, and finally to the Milwaukee VA Medical Center where he went through rehab.

It wasn’t until February 1976, that Mark and I met. He and his father came in looking for a vehicle that Mark could use independently. We custom built a green 1976 Chevrolet van equipped with the necessary modifications.

This was before many products were commercially available so some had to be designed and fabricated from scratch. But, after we completed the build, Mark could again be independent, get behind a wheel, and drive by himself.

In 1987, while Mark was at the VA Medical Center in Minneapolis, Minnesota, he and his nurse, Mary, fell in love and were married that same year. Today, Mark, Mary, his two children (who both enlisted) and I continue to talk and see each other often.

We share personal stories about our families, along with the ups and downs that 38 years can bring. We’ve equipped a dozen or more vehicles for Mark since his first green Chevy. We’ve both lost count but find it’s really not important.

We take for granted the independence these vehicles have given Mark over the years. Today what’s important is the friendship we continue to share.

The friendship that started on that day back in 1976.

Do you want to share your Rollx Vans story with our readers? Contact our sales department, and your story could be featured on our blog!