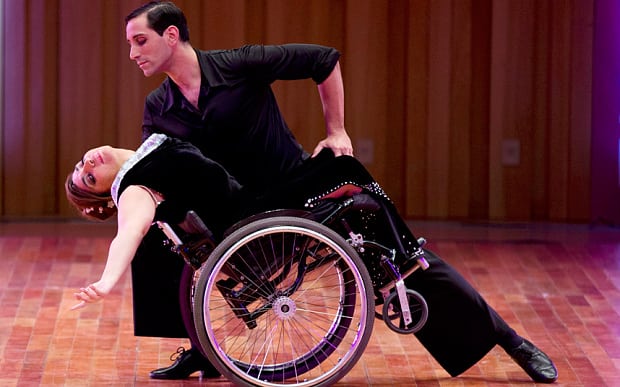 The tango, often called the dance of love or passion, is known throughout the world.  Tango dancing originated along the border of Argentina, and every year, the best tango dancers from countries all over return to its birthplace to compete in the World Tango Championship.

Competition is fierce with pairs presenting their best moves to a panel of judges. There are two categories of competition.

The first is Salon style, which is more traditional and carries stricter rules.  The second category is Stage.  Stage is generally more choreographed, offering room  for  incorporation of other dance styles.

Usually, this includes ballet or interpretive dance, but this year, one of the Stage pairs included, for the first time in competition history, another style of dancing:

A Dance of Love and Passion

Gabriela Fernanda Torres was paralyzed in a car accident when she was two.  She can’t remember her life before needing a wheelchair to get around.  But that never deterred from falling in love with dancing.

From her childhood on, Gabriela loved to dance.  Being from Argentina, she grew especially fond of the tango.  At no point did she think of letting her wheelchair stop her from doing something she had such a strong passion for.

So she became a dancer.

With her partner, Pablo Rafael Pereyra, Gabriela competed in the Stage level of the World Tango Championship.  They were the only integrated pair.  Gabriela’s main hope was that they would be judged fairly, just like any other couple.

Though they didn’t end up winning the competition, which just ended this past weekend, they received acclaim for their performance.  Whether or not they compete next year remains to be seen, but there appears to be a good chance.

In the meantime, Gabriela will continue to dance.   Currently, she is a part of the dance group Dancers Without Borders.

Integrating into the Un-Adapted

Adapted sports and events offer great opportunities and in many instances, fierce competitions for those who use wheelchairs or other forms of mobility assistance.  However, there are a rising number of instances where people with disabilities are competing right along able-bodied participants in a variety of events.  Examples include, of course Gabriela, as well as people like Noah Galloway.

Noah Galloway is a veteran and double-amputee who competes in grueling competitions such as the infamous Tough Mudder event.  He also competed on Dancing with the Stars where he finished 3rd.

Arguably the most famous (and infamous) example, however, is Oscar Pistorius.  Oscar rose to the national spotlight when he qualified for the 2012 Summer Olympics despite the fact that he has both of his legs amputated from the knee down.  In their place, he has j-shaped, carbon-fiber prosthetics that allow him to run at full speed.

There was controversy that arose upon his entrance into the Games, as some felt the prosthetics actually gave him an advantage due to their engineering.  Nevertheless, he was allowed to compete, making him the first ever amputee to participate in the Olympics.

Unfortunately, Pistorius’s career was brought to a sudden and tragic halt when he accidentally shot and killed his girlfriend last year, mistaking her for an intruder.

Still, he has paved a way for future amputees to hopefully find their way into the Olympic Games, as well as other high ranking competitions.

As other athletes with disabilities step into non-adapted areas, we’ll continue to spotlight them here at the Rollx Vans, your wheelchair van f0r sale provider.

What do you think of wheelchair users and people with amputations participating in non-adapted competitions?