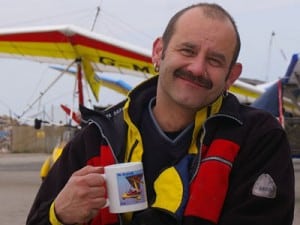 Some people were never meant to keep their feet on the ground.

David Sykes, a middle-aged man from England has lifted off to begin his second long distance flight across the globe, this time heading for the North Pole. The trip, which will be done using a microlight (a lightweight, fixed-wing aircraft that seats one), will make Sykes the first paraplegic man to fly solo from England to the North Pole.

Five-thousand Miles to a New Record

The flight is expected to pass through five countries as Sykes traverses five thousand miles and is expected to last up to four weeks’ time (with several stops for refueling).

Although it seems like a long way to fly, Sykes’ last trip from England to Australia was three times as far, a sixteen-thousand mile microlight flight that took more than three months to complete.

The difference with between his previous and current adventure: sub-degree temperatures that will make the flight hard to withstand. Sykes is expecting temperatures to dip as low as negative forty degrees as he crosses the Arctic ocean to reach the literal top of the world.

Thankfully, Sykes will wear a specially designed heated flight jacket, gloves and helmet to help him withstand the cold and prevent frostbite.

David Sykes was never a man who was held back by poor odds. In 1993, while returning from a trip on his motorcycle, Sykes was struck by a car, leaving him with a broken back, shattered ribs and zero chance of walking again.

Sykes not only survived the ordeal, he recovered from the accident far quicker than doctors could imagine. They predicted that he would have to remain hospitalized for more than two years.

A New Outlook on Life

Instead of merely adjusting a life that was sure to include wheelchairs, handicap vans and hardships, Sykes set out to make the most of his life.

Since then, he has taken up parachuting and gained his pilot’s license in 2001. Ten years later, in 2011, he entered the record books with his solo flight to Australia.

Now, with his sights set on the North Pole, he has begun a new journey that will once again place him in the record books.

With crowds of family and friends gathered to support him, Sykes took off from Rufforth Airfield, near York, England. The flight will raise money for Martin House Children’s Hospice.

Make sure to check out David Sykes’ website for more information on his latest adventure.

What do you think of Sykes’ flight to the North Pole? Let us know in the comments below!