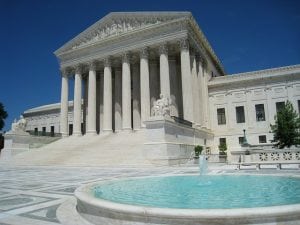 On October 31st, while most people were out celebrating Halloween – getting treats and playing tricks – Ehlena Fry, a 12 year-old Michigan girl with cerebral palsy was taking her disability rights case to the highest court in the land.

It’s not often that a case involving a person with disabilities makes it all the way to the Supreme Court, which makes this a case that everyone in the community will be watching.

The Details of the Case

In 2009, Ehlena Fry, just 5-years-old at the time, received a service dog to help her after she was diagnosed with cerebral palsy. The dog was a golden retriever/poodle mix named Wonder, who was trained to help Fry with normal daily tasks, particularly opening doors, turning off lights and removing her jacket. These are all normal tasks that a 5-year-old would undertake throughout a normal day at school.

Unfortunately, Fry’s elementary school, which is a part of the Napoleon Community Schools and the Jackson County Intermediate School District, denied Wonder from going to school with Fry. This decision was made despite having a recommendation from her primary physician.

The Fry family sued the school district in federal court, but the case was unfortunately dismissed. Fry attended school for a year without Wonder, but her family opted to homeschool her for the next two years.

The school district maintains that their Individualized Education Program (IEP) already provides a human aid to children who need one. Because of this, they assert that Fry does not need Wonder to get through the day at school. The district did allow a trial period where Wonder could help Fry throughout the day, but at the end of the school year came to the decision that Wonder could not attend school with Fry.

The Issue At Hand

Ehlenas time back at school didn’t last long. Her parents, fearing that the school would resent her, opted to pull her out and send her to another district. In 2012, they also sued the school, seeking monetary damages for their trouble.

After a district court dismissed the suit, an appeals court ruled with the Frys and the case has made its way all the way up to the Supreme Court.

The legal issues in the case involve a number of federal statutes and whether or not the Frys exhausted the Individuals with Disabilities Act (IDEA) and the available relief.

What do you think of the case? Join the conversation by commenting below!