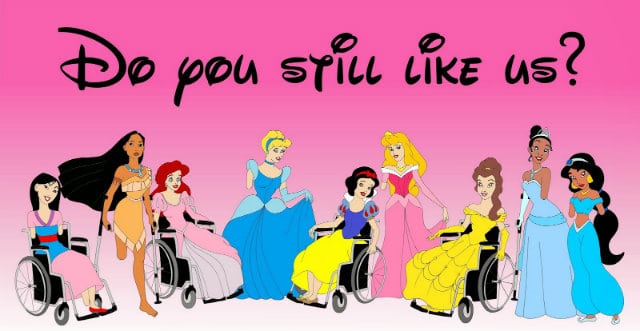 Disney Princes and Princesses have long since been characters that children look up to and idolize. And, because of their popularity Disney Princesses seem to pop up everywhere you look.

The Internet is one such place where you can’t seem to go too long without seeing a Princess meme or rebooted depiction. For example, the newest Princess, Leia has been rebooted online as a Disney Princess, and we’ve also seen the Disney Princesses in Princess Leia’s many revealing outfits.

Recently, a disabled artist named Alexsandro Palombo wanted to bring meaning to Disney characters and the Princesses in particular. He used them in a series that visually emphasized ableism by drawing the Princesses with disabilities.

The Symbolism Behind the Art

Palombo was inspired to create disabled depictions of the Princesses because he himself suffered a rare form of cancer that left him with parts of his body paralyzed after several operations to remove the disease. He wanted to bring light to the problems with discrimination directed specifically towards those with physical disabilities in our society.

With so many people in the world suffering from disabilities, it’s a welcome sight to see these characters portrayed in a way that is different from the perfected image Disney has created for its beautiful characters.

Disney and other children’s networks influence what kids like, dislike, how they learn, and even how they treat others. So, with a lack of physical disabilities displayed within the Magic Kingdom Palombo is hoping, through his art, that kids will be able to see their favorite characters in new ways.

What do you think of these disabled depictions of popular Disney characters? Do you think this will help kids resonate with characters? Why or why not?