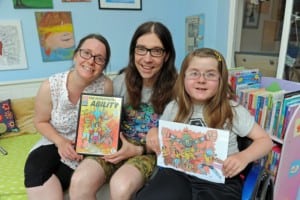 For the parents of a child who uses a wheelchair, day-to-day life can often fall into a pattern that becomes quite familiar. It’s a life filled with wheelchair maintenance, everyday chores and getting around town in a wheelchair van.

Unfortunately, parents also have to help their children confront the stigma that comes with them being in a wheelchair.

For many children who use wheelchairs, dealing with this attached stigma can be a challenge. Many parents turn to inspiring children’s books about wheelchair users to help their children learn, but sometimes a parent comes along who take things a step further. Such is the case for one father from Portsmouth, England, who decided that having his daughter read about heroes who use wheelchairs wasn’t enough.

Which is why he decided to transform her into one himself.

How the Department of Ability was Born

Dan White, an illustrator and father of nine year old Emily White, who suffers from Spina Bifida, was so inspired by his daughter’s strength that he thought of the idea for a comic and decided to make it a reality. He sat down and started drawing concepts for characters, some of whom would eventually become part of the crime-fighting team, The Department of Ability.

Led by Emily, who comes equipped with a multi-functional airborne wheelchair, The Department of Ability has members who have either lost limbs or the use of their eyes. Each character has a different ability that helps them fight crime in all its forms.

“They are not here to lecture you,” says Mr. White’s website. The father and artist tried to find positive role models for his daughter in television and books. After finding none, he set out to create the comic, which he hopes will one day become a TV show that children of all abilities can watch.

As of now, Mr. White, his wife and Emily are trying to get the comic animated with Foxtale media. They have also received generous donations from Strongbones Charity, who have helped fund the comic’s publication and distribution.

To learn more about The Department of Disability comics, visit Dan and Emily White’s website. The website even has merchandise that can be purchased to help the comic become an international success. Mr. White hopes that one day the show will become an inspiration “for all children, with or without a disability.”

Would you like to see more wheelchair-using superheroes? Let us know in the comments below.