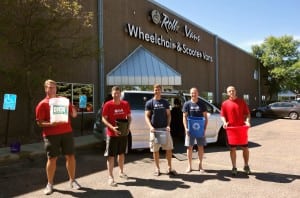 Almost two years ago, some members from our team here at Rollx Vans gathered outside of our building to pour buckets of ice water over their heads.

They had accepted and participated in the ALS Ice Bucket Challenge, and in doing so they had joined a movement that swept across the nation, turning heads and making people laugh for weeks.

But that is not all the ice bucket challenge accomplished, it also raised awareness for Amyotrophic Lateral Sclerosis (ALS) and helped the ALS Foundation raise more than $100 million dollars in 2014.

Compare that to the $2.8 million the organization had raised the year before.

In total, the Ice Bucket Challenge raised about $115 million, $77 million of which went to ALS research.

The Money Didn’t Go to Waste

Even while the Ice Bucket Challenge was bringing smiles to faces all across the country (while donating millions to good causes), the challenge still had its skeptics, with people wondering whether or not it would actually do any good.

Thanks to a recent revelation last week, it seems that those skeptics couldn’t have been more wrong.

A new Nature Genetics study, which was funded using the money raised by the Ice Bucket Challenge, has produced some promising results, according to the ALS Foundation.

What the Study Found

It was discovered by searching the genomes of more than 1,000 families who have a person suffering from ALS. The study is part of a project called MinE, which is looking into the genomes of about 15,000 people with ALS.

The results of this gene’s discovery can prove helpful in designing future gene therapy for ALS patients, the study suggests.

We Hope it Leads to Something Incredible

As a provider of accessible vans, we have worked with customers who have ALS, and we hope that one day there will be a better method of treatment for the disease. Until then, we hope that another movement like the Ice Bucket Challenge will help raise money for further research and development.