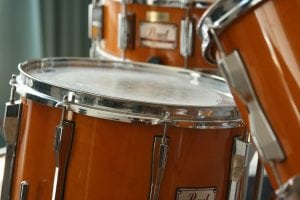 Being a part of the wheelchair-using community is about adapting to your strengths. It’s also about helping one another find new ways to do what you love.

At 23 years old, Jason Gerling loved drumming, and he was quickly on his way to becoming a career professional when his life abruptly changed. Driving home one night from a performance, Jason fell asleep at the wheel of his car. The resulting accident left him with a decompressed skull fracture, concussion and punctured lung.

It also made him a C6/C7 incomplete quadriplegic.

Without the use of his legs, it seemed like his drumming career was over.

The Beat Goes On

Thankfully, this was unacceptable to Jason Gerling, and he not only drums professionally today, he is also helping others do the same.

Thanks to some ingenuity, and a whole lot of determination, Jason has worked with others in his industry to create an adaptive drum kit that is specially made for drummers who cannot use their legs.

Creating a New Way to Drum

Because drummers traditionally use their feet to strike bass drums, Jason had to figure out a way to use his arms to get the job done. The revolutionary drum kit he has created uses a series of strategically placed triggers to activate a speaker that is concealed inside a makeshift bass drum.

The triggers, which are placed all over the drum kit, allow users to recreate kick drum sounds using their arms. Everything else on the kit remains acoustic, keeping the sounds as natural as possible.

The kits also uses two separate hi-hat cymbals – one of which is closed while the other remains open – in order to achieve the desired sound without having to open and close the cymbals using his feet.

Inventor and Inspiration to All

Since he picked up the drums again in 2004, Jason has never stopped pursuing his dream. His adaptive drum technology has toured with Ben Rector, Pentatonix and plenty of other artists. He also writes and composes music for commercials.

On top of pursuing his own success, Jason also encourages other drummers to do the same. He has been a keynote speaker at college campuses, rehabilitation facilities, churches and other major events.

Learn more about Jason Gerling at his website, Wheelchair Drummer.