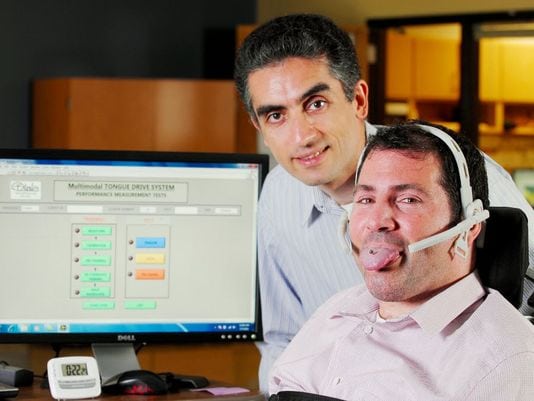 Jason DiSanto has been using a motorized wheelchair that responds to commandments via a straw and the sip-and-puff method. While this has proved to be effective for him, he’s currently working with the Georgia Institute of Technology to develop a tongue-controlled wheelchair that will be faster and easier for users to manipulate.

This new system is called the Tongue Drive System.

The sip-and-puff wheelchair device has been in use since the early 1960s when it was first developed. This method is paired with a straw or tube and requires sipping or puffing motions to send commands.

DiSanto has used this technology since an accident in 2009, left him without the use of his limbs. However, this method is very limited in functionality for DiSanto and other quadriplegic users.

Moving into the Future

As is the case in every technology, including that of handicap vans manufacturers, we’re always looking to the future for new and better ways to do things.

DiSanto was the first of 11 wheelchair users to try the new Tongue Drive System which requires magnets to be implanted into the users tongue. After implantation a series of tongue motions can be performed by the user to send information into a headset, which then relays the information to the chair.

In the future this technology will not be limited to just controlling wheelchairs, but will also allow user to control cell phones, televisions, and computers all with just their tongue.

What do you think of this new technology? Would you consider using it? Why or why not?