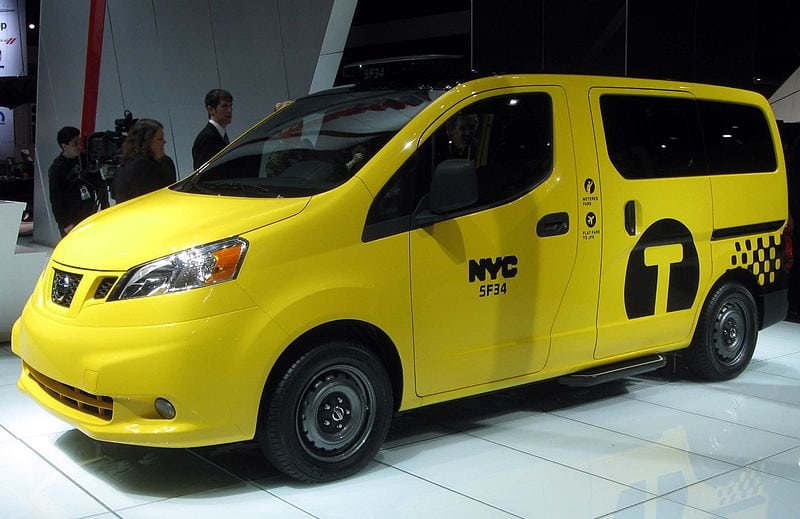 The Ford Crown Victoria (more commonly called the “Crown Vic”) is a well known car immortalized for two reasons: it’s popularity as a cop car and it’s even greater popularity as a taxi.

But the Crown Vic was discontinued in 2011, leaving New York City in need of a new, more modern taxi.  So they held a competition called “Taxi of Tomorrow”.  It came down to three finalists: the Karsan V-1, the Ford Transit Connect, and the Nissan NV200.

Despite the history of Ford in the taxi service, the Nissan NV200 was declared the winner.  Mayor Bloomberg announced that the NV200 would replaced the city’s 13,000 yellow taxis over the course of 5 years.  The phase out period officially began this year, 2013.

The vehicle is very modern in design, featuring plenty of headroom, USB charging ports inside for passangers, a transparent roof to appreciate the New York architecture, and it gets around 25 MPG.

No Room for Wheelchairs

The decision, like so many major overhauls, caused a great deal of controversy.  Many people were confused as to why a foreign company was chosen over the American made Ford Transit Connect.

But the bigger issue was a complete lack of wheelchair accessibility.  The American Disabilities Act in conjunction with the Department of Transportation states that van taxis MUST be wheelchair accessible.  What was New York City’s defense to this?

It’s a pretty bold claim considering the NV200 clearly looks like a van.  Further adding to confusion is the fact that both the Karsan V-1 and the Ford Transit Connect are wheelchair accessible.  Thankfully, after a good amount of silence and misdirection, the city and Nissan are showing off a wheelchair accessible variant of the NV200.

The wheelchair accessible version will feature a rear access ramp allowing for easy access straight into the van.

A Step in the Right Direction, but Not Quite There

This converted version isn’t actually on the streets yet, and will most likely represent a very small portion of the new NV200s that hit the NYC streets.  Currently only about 2 percent of NYC’s 13,000+ taxis are wheelchair accessible.

Considering the 60,000 New Yorkers in wheelchairs, that percentage seems to fall a bit short.   While we hope quite a few of the new NV200s end up being to converted to handicapped vans, right now this seems like a bit of a missed opportunity to make the Big Apple much more open to everyone.