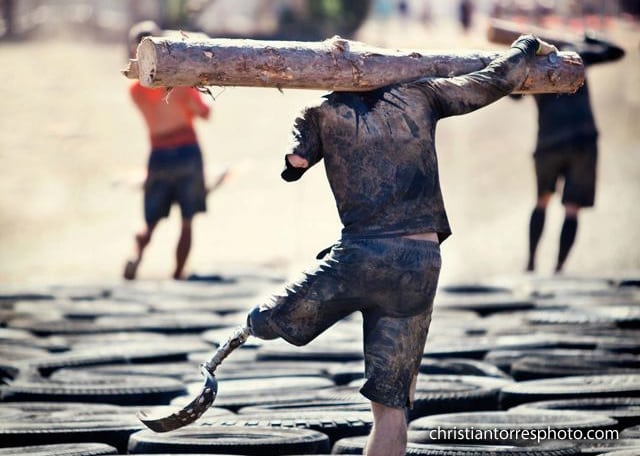 It was Christmas morning when Noah Galloway awoke.  In front of him was his mother and father.  Despite the holiday, both parents wore a look of sadness.  Before he could ask what was wrong, his mother explained.

Noah had lost two of his limbs.

His left arm and leg.

As a fitness loving military man, Noah was overwhelmed.  The last thing he remembered was driving off with his platoon in Iraq.  Shortly after leaving their camp, that vehicle tripped a homemade IED.

And now, Noah Galloway was stuck in a hospital bed on Christmas, wondering exactly what he was going to do with the rest of his life.  Of course, that was seven years ago.

In the past seven years, Noah has managed to accomplish quite a bit.  It would seem the loss of his arm and leg weren’t the end of his life, but the beginning…

Getting through the Worst

The first emotion Noah felt after hearing the news in 2005 was anger.  After what seemed to be endless surgeries, he found himself quickly becoming addicted to top level pain meds.  The rage he felt only made the addiction stronger as he wished to drown out his present circumstances.

It could have very well been a preview of the rest of his life.  Thankfully, his father sat him down and spoke some sense into.

“You have two options,” his father said, “Be a legalized drug addict or come off it and move forward.”

The words hit hard.  It helped that Noah’s father had lost part of an arm when he was 18.  So Noah quit the methadone and oxycontin leading to some agonizing withdrawals.

Unfortunately, the drugs would soon be replaced with alcohol as Noah began hanging out with some old friends.  He was still attempted to fill a hole in his life.  It wasn’t till a friend bought him a gym membership and got him a prosthetic limb that his life truly turned around.

At first Noah was slightly embarrassed to be seen working out.  He would get an assortment of strange looks from people.    But as his strength grew, so did his confidence.  Finally, someone told him about an event called the Warrior Dash.

The Warrior Dash is a 12 mile obstacle course through muddy terrain.  The biggest challenge for Noah? A 20 foot tall rope wall.  It took nearly every physical ability he had to do it,  but a tremendous effort, Noah made it over the wall and through the finish line causing the crowds to go nuts.

Shortly after Noah began running marathons and even climbed a pyramid in Indonesia.  As his story began to spread, many began following his life through Facebook and Twitter.  These online relationships led to him doing the Tough Mudder (an event very similar to the Warrior Dash) with a woman who has Brittle Bone Syndrome.

Today, Noah Galloway continues to motivate people around the nation traveling as a speaker.  You can follow him on Twitter here or check out his Facebook page here.