Organization Creates Costumes for Children in Wheelchairs
Skip to content 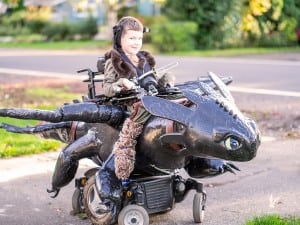 Halloween is quite an exceptional time for children. It’s a time where any child can truly become anything that they want to be for one night. They can transform themselves into literary or film characters, historical figures, creatures of the night or anything that that pops into their wild imaginations.

Although parents of children in wheelchairs are usually eager to leave their handicap vans parked in the driveway and go door-to-door with their children, one struggle that they often face is incorporating a wheelchair itself into a Halloween costume. It’s a process that can often be tricky and expensive to do.

This is a problem that the founders of Magic Wheelchair are all too aware of, which is why they have taken it upon themselves to design, fabricate and deliver custom made Halloween costumes to as many children in wheelchairs as they can.

Magic Wheelchair is a non-profit organization that was founded by Ryan and Lana Weimer, an incredibly inventive couple who are the parents of five children, three of whom were born with Spinal muscular Atrophy, a form of muscular dystrophy.

The Weimer’s goal is simple: “put a smile on the face of every child in a wheelchair.” For several years now, the couple has been accepting donations from generous people and using the money to create epic Halloween costumes for children in wheelchairs. Every year, the Magic Wheelchair organization raises thousands of dollars and recruits volunteers to help them create as many costumes as possible. This year alone, 769 backers pledged $25,688 on the organization’s Kickstarter page.

Not Your Ordinary Halloween Costume

Each costume created by Magic Wheelchair and its volunteers costs about $3,000 to make. Why so much? Because the costumes created by this team are truly something to behold. These are not simple sets of clothing for a child to wear. Magic Wheelchair teams up with the Stan Winston School of Character Arts. The school, founded by a 4-Time Academy Award winning character creator, helps the organization to fabricate large-scale costumes that incorporate a child’s wheelchair completely.

One of their past projects is a detailed costume of toothless from Dreamworks’ “How to Train Your Dragon” (pictured above).

How Are Children Selected to Receive Costumes?

Each year, the organization accepts one minute videos from children in wheelchairs explaining what costumes they want created and why they should be selected. Children of all ages are encouraged to apply.

What character would you like to see brought to life by Magic Wheelchair? Let us know in the comments below.