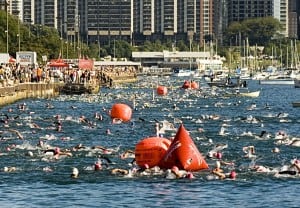 If you have one of our new wheelchair vans, this September is the perfect time to take it out on its maiden voyage. Your destination: the windy city of Chicago.

In just three weeks time, elite paratriathletes from all across the globe will come together in Chicago to compete in the Paratriathlon World Championships. The event is held just once per year and showcases some of the best athletes from countries all over the world.

The five day event will run from September 15th to the 19th, and kicks off from the Monroe Harbor just east of South Lake Shore Drive.

Triathlons are always broken into three sections: a swim, a bike and a run, all in that order. Elite athletes competing in the sprint distance triathlon, which spans a total distance of 25.75 kilometers, will start by swimming through a 750 meter course in lake Michigan. The competitors will then exit the lake, get on their bikes and traverse a 20 kilometer loop that runs down S Columbus Drive and through Grant Park. Finally, the athletes will go another five kilometers on the running portion, which takes them around Buckingham fountain a total of three times.

In the end, only one person will be crowned the champion, but all competitors will be honored for their strength and tenacity.

The ITU Elite Paratriathlon World Championship race begins at 7 am CST on September 18th. The top times in this race can potentially qualify for the Rio Summer Olympics in 2016.

The Open Paratriathlon World Championship race will begin on September 19th at 9:30 am CST. The PC Open Paratriathlon Relay, which consists of teams of three (with each athlete completing a different portion of the race) is set to kick off at 9:40 CST.

For more information on the Paratriathlon World Championships, you can check out the Chicago Triathlon website.

There’s More to See than Just the Race

While you’re in the Chicago area, don’t forget to check out some of the most widely recognized attractions. This accessibility barriers infographic can help you avoid the places where handicap accessibility is known to be lacking.

Other than these places, Chicago is a very handicap accessible city with a lot of incredible sights to see. Whether you are into museums, parks or beaches, there is something for everyone to enjoy.

Do plan on going to the Paratriathlon World Championships in Chicago? Let us know in the comments below.