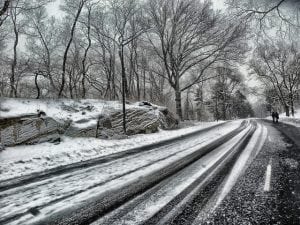 Snow makes it harder for everyone to get around in the winter.  Whether you’re driving, walking, or using a wheelchair, simple trips can become a chore thanks to this slippery precipitation.

Everyone deals with the snow in their own way.

Some try to stay in as much as possible, maybe waiting for someone else to scoop or plow it away.  Tim Taylor, however, decided he wasn’t going to let the snow stop him getting around.

So naturally, he attached a plow to the front of his wheelchair and started driving through it.

Adapting to the Weather

About 13 years ago, Tim was on his way to pick up some pizza with his girlfriend and her sister when they saw a car coming at him.  Swerving out of the way, they lost control of their vehicle, went off the road into the air, and hit a tree.

Tim woke up 7 days later to discover that he was the only survivor of the crash and that his C5 vertebra had been shattered.

Readjusting to life was hard, to say the least.  But Tim was determined to keep moving forward.

“I still have a lifetime of goals,” he said.

After several surgeries and a lot of therapy, he was able to get some sensation back in his toes, as well as limited wrist movement.  This allows him to control his four-wheel drive wheelchair.  After seeing a video of an older gentleman plowing snow in a motorized chair, he decided to make something similar.

He drew up a sketch on his computer, and under his direction, his dad and brother helped assemble it.  After the success of this project, he’s started designing a mount for his chair that will allow him to do photography.

Tim has always loved being outside, and thanks these modifications, he’ll have more than enough reasons to get out.

Looking to the Future

Tim’s next goal is to purchase a wheelchair van.  Originally, he had considered starting a GoFundMe campaign, but decided to try and raise the money himself through plowing, DJ-ing, and whatever else he can think of.

While wheelchair van conversions certainly come at a cost, with his strong will and positive attitude, we’re sure he’ll achieve his goal soon enough.  He says “Every day there can be a new achievement, whether you have a disability or not.”

Have you or someone you know adapted a wheelchair to perform a specific task or hobby?  Share below.