Redesigning the Handicap Symbol: Time for a Rebrand? - Rollx Vans
Skip to content 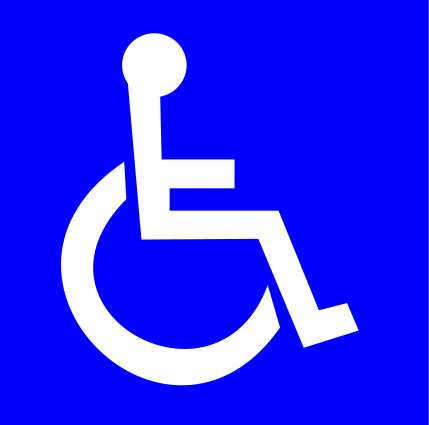 Anyone who has seen or read The DaVinci Code knows that a symbol can mean a lot of different things to different people.

A symbol is typically a representation of an ideology and/or organization, and how people perceive the symbol directly effects how they view what it stands for.  And it’s for this reason that many people are eager to change the “handicap symbol”.

The handicap symbol (officially known as the International Symbol of Access) is one of the most recognized images in the world.  Whether it’s on a door, a parking space, or a ramp, almost everyone knows that blue and white wheelchair outline represents handicap accessibility.

So why are awareness groups going around and changing such a widely recognized symbol?  We’ll get to that in a moment.

The History of the Handicap Symbol

While Susanne’s design was met with general approval, some felt it was lacking in personality.  It was then that project lead Karl Montan stepped in and added a circular “head” to the top of symbol.

After Montan’s minor adjustment, the design was accepted unanimously, and the World Congress officially adopted the symbol in 1969.

Since then, the symbol has remained completely unchanged.

While the International Symbol of Access has made a significant impact in handicap awareness, there are those who believe it’s time for a change.

As I said before, a symbol affects how people see the ideology or group that it represents.  In the case of the Symbol of Access, the figure in the chair looks very still and passive.  This idea of passivity is then passed on to the community of people with disabilities.

And that just doesn’t sit right with organizations like The Accessible Icon Project.

The Accessible Icon Project is a movement with the goal of changing how the world views people with disabilities, starting with the Symbol of Access.  They don’t just have a proposed redesign planned out.

They’re actually going out and painting it over existing handicap symbols.

Their new symbol features a figure who is actively moving forward.  Though it evokes a much different personality than the previous symbol, it remains instantly recognizable as a representation of handicap accessibility.

Their hope is that by getting this new symbol out there, they can make a push for it to become the new official International Symbol of Accessibility.  If you’re interested in helping them, you can visit their official website here.

On their website, you can find more information, high resolution images of their new logo, as well as merchandise like shirts, stickers, and stencils.

So what do you think?

Is this redesign a better representation of those with disabilities?  Is it time for a rebranding of the handicap symbol?