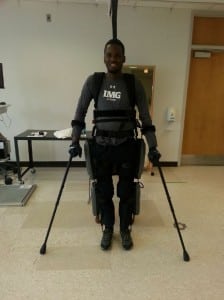 We are slowly but surely entering an era where anything is possible.

This certainly seems to be the case for Roosevelt “R.J.” Anderson, a paralyzed Army veteran from Chicago who is learning to walk again, all thanks to a new piece of machinery, not to mention a generous donation from a wealthy donor.

The new bit of technology is known as ReWalk Robotic Exoskeleton, a rather impressive mobility device that has the potential to change the lives of many people who suffer from a variety of physical disabilities.

The first piece of machinery of its kind that has been cleared by the United States Food and Drug Administration, the ReWalk Exoskeleton is a battery powered, wearable robotic exoskeleton that provides powered hip and knee motion to enable individuals with Spinal Cord Injury to stand upright and walk, according to its website. The devices allows a person who is normally confined to a wheelchair to stand, sit, walk for as long as its batteries remain charged (currently, the battery life is about four hours).

Because the device requires the patient have some mobility in his or her trunk, seventy percent of people screened for a trial fail to meet the requirements for using the device. Add on top of that a $70,000+ price tag and the device is not yet set for a mass release across the country.

A New Life for an Army Veteran

So far, the device has only been given out to just over fifty people nationwide, but the thirty-two-year-old Anderson was lucky enough to qualify and receive one, compliments of an anonymous donor who was seeking to help an injured veteran.

Due to a tragic motorcycle accident that left Anderson paralyzed, the Army veteran was told by doctors that he would never walk again. Although Anderson thought that he would live the rest of his life in wheelchair, shopping for handicap vans and finding activities that he could still participate in, he was lucky enough to meet the requirements of the chair.

He was even more lucky to receive an incredible gift from the unknown donor.

Although the ReWalk Exoskeleton is limited in its release, the fact that it has cleared the FDA standards remains an incredible sign for the industry. Currently, more than eighty similar devices are either in development or just entering the marketplace, meaning that we will surely see radical advancements in this type of technology over the next few decades.

Hopefully by then the devices will be suitable for a greater range of people with disabilities.

What do you think of the ReWalk device. Let us know your thoughts in the comments section below!