Rollx Vans in Motion: The Journey of a Customer with Polio
Skip to content 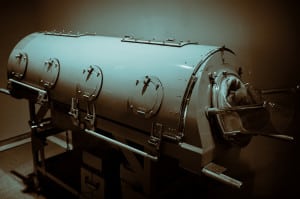 As part of a new feature series to the Rollx Vans blog we will share the stories of individuals or families of individuals that currently or have previously benefited from our handicap vans. In this first edition we introduce Merlin Pickle, a Disabled American Veteran with Polio who resides in Eden Prairie, Minnesota.

Customers since 2002, Merlin and his wife Betty converted their Chrysler Town and Country van upon Merlin becoming a full time wheelchair user. While that is where their journey with Rollx Vans starts, Merlin’s story begins much earlier. Shortly after completing his service as a Radar Technician in the Army Air Corps, he was stricken with Polio. In October 1946, he was sent to University Hospital and spent six weeks in an iron lung. He experienced round-the-clock care from three nurses and a doctor from New York.

After being told he would never walk again, Merlin was able to return home in February 1947. Through physical therapy and determination he proved the doctors wrong and started walking. When he was feeling healthy he enrolled in school with his GI Bill and began his first post-graduate career with Nash Finch Company in 1950.

As walking continued to be increasingly tiresome, Merlin retired from his second career position with C.H. Robinson in 1987. Throughout the 1990s he used a scooter as a way to alleviate his legs when walking was difficult. In 2002, Merlin became dependent on a motorized wheelchair. At that time, Merlin and Betty turned to Rollx Vans to convert their van so they could continue to have the independence they were accustomed to.

Merlin is a member of and volunteers with a local chapter of Kiwanis International. With use of his van, he’s able to attend weekly meetings, events and other special occasions. One family event he recently used his Rollx Van to attend was his and Betty’s 65th wedding anniversary in St. Louis Park.

With Betty or one of their two sons as the driver, Merlin uses the automatic locking mechanism to situate himself in the front passenger side with ease. He enjoys being able to get into the vehicle at the push of a button and without assistance. Not only that, his favorite part is being able to sit at the same height as the driver so no one knows the difference.

What do you think of Merlin’s story? Do you know someone with Polio that benefits from one of our handicap vans? Leave your comment below and let us know.