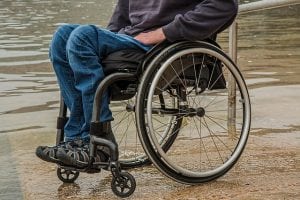 It’s a new year, which means that new technology will be unveiled for both the wheelchair van and wheelchair industries. But before we start talking about the latest technology of 2016, we’d like to take a step back and recognize a company that found some success late in 2015.

Back in March of last year, we wrote about a growing company called Rowheels, Inc. The company, located in Fitchburg, Wisconsin had developed a revolutionary new product for wheelchair users.

The product, named the Rev1, was a new type of wheel that was designed to fundamentally alter the way manual wheelchairs are propelled. At the time, we thought it was a great idea that merited further development, and it turns out that some important people thought it was an idea worthy of a sizable investment.

Just before Christmas of 2015, the Rowheels company reported that it would be receiving a 1.5 million dollar investment led by Madison strategic operating capital fund, WISC Partners. Rowheels will be using the funds to help commercialize their wheels and make them widely available across the growing global wheelchair market.

How the New Wheels Work

Wheelchairs require a lot of energy and muscle to move, that is no secret, and although the initial design has been around for centuries, very little has been done to alter the fundamental method of manual propulsion.

Everything from posture to body mechanics are improved by using the Rev1 wheels. They allow the user to remain upright, rather than leaning forward too much to propel the chair forward. This prevents the user’s chest muscles from suffering from weakness and inflexibility. The Rev1 wheels also strengthen the upper back, shoulder and bicep muscles that are often neglected while using a traditional wheelchair.

Pull wheelchairs also promote better biomechanics and, since they require fewer pulling motions than they would pushing motions, they decrease repetitive stroke counts that cause stress injuries.

What do you think of the Rev1 wheels? Are they a gimmick or are you legitimately excited for their commercialization in 2016?