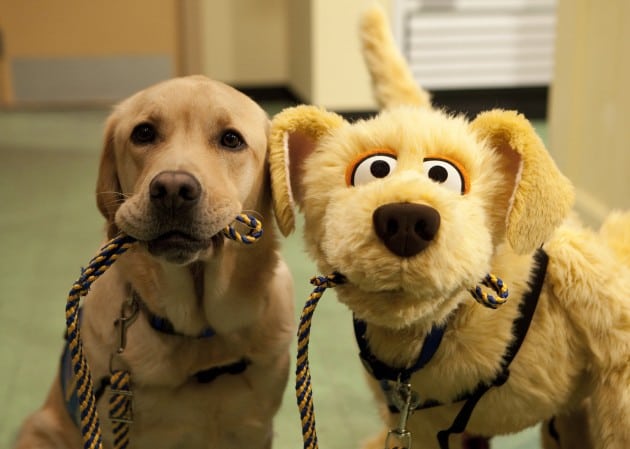 In a previous post (found here), we shared a brief history of mobility assistance dogs and the amazing assistance they can bring to a person’s life. While we all know how special service animals can be in what they do for people, as they often provide their owners a great service like our handicap van does, they don’t usually get the spotlight they deserve.

Much like characters with disabilities aren’t often featured in movies or television, service animal mentions in pop culture are even fewer and far between. But, that was the past. In recent years we’ve started to see a change as more and more service dogs are given prominent roles in movies and television shows.

One small example of a step towards including service dogs in pop culture, is through a book-turned-movie titled, My Sister’s Keeper. Lawyer and prominent character in the book, Campbell Alexander, has a constant companion. Though he is asked many times why he is in need of a service animal, his answers either dodge the question entirely or he creates an excuse.

In the end, it turns out that Campbell is in need of the service for a medical purpose, and that truly shows when his service dog saves his life. While his dog doesn’t play a lead character, it’s hard to forget what he does for the person he’s there to protect.

One name that’s been drawing some serious media attention recently is Brandeis. Brandeis is the newest character addition to Sesame Street. In his debut episode, he is looking for a job and tries working at a laundromat folding laundry and sweeping floors at another shop. Neither job is a good fit for Brandeis.

Then, he is introduced to the concept of being a service dog. It’s explained to him that it takes a lot of intelligence and training, but he knows he can do it and accepts the challenge. He trains for many weeks before finally becoming an official service dog. He’s paired with Liliana, and helps her with her school books and around Sesame Street.

The nonprofit organization Canine Companions worked with the Sesame Street creators to bring the episode to life and increase awareness about service animals.

The last example we’d like to share is Dug from the Pixar movie Up. While there is no specific proof or confirmation from the creators, it’s rumored that Dug is a service dog. This is because Dug has the intelligence and temperament that is common among service animals. Also, because he does mention that his owner gave him the task of finding the rare tropical bird for him. But, even if Dug isn’t officially a service animal, we’d like to think that he would make a great service dog!