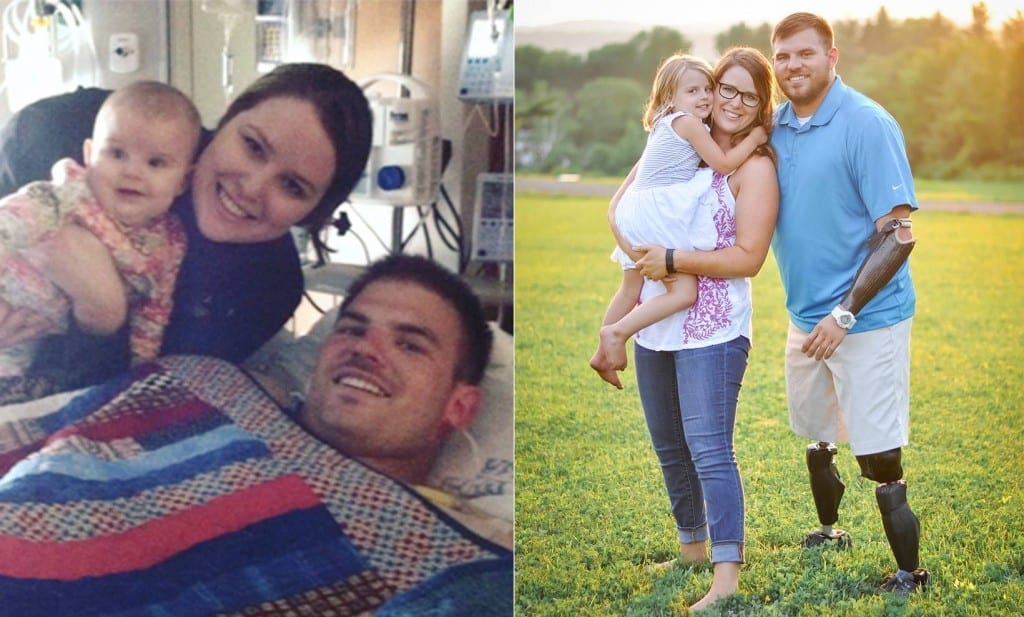 Four days before his 25th birthday, Staff Sergeant Travis Mills was with his platoon during his third tour in Afghanistan.  After coming to a halt, Travis went to set down his back.  When the pack hit the ground, it set off an improvised explosive device that would forever alter Mills life.

Both arms and legs were torn off in the explosion, making Mills the 4th quadriplegic of the Iraq/Afghanistan war.

When he returned home, he felt incapable of taking care of his family.  Unable to do something as basic as opening a jar, he told his wife to leave him and start a new life.  Then one day, Travis was playing with his 6th month old daughter, when he noticed something.

She was sitting on his chest, laughing and giggling, completely unaware that there was anything different about him.  That’s when he realized that he still had a life to live.

First, he had to get through physical therapy.  The doctors told him it would take three years.  He got it done in 13 months.  From there, he decided he wanted to help others with similar circumstances to his own.

The rate of veteran suicide and divorce was on the rise, particularly for those who were injured in the line of duty.  Mills saw an opportunity to help change that.  So he started the Travis Mills Foundation.

What is the Travis Mills Foundation?

The Travis Mills Foundation is an organization dedicated to supported combat-wounded veterans as well as their families.  To do so, they set up a retreat location where veterans and their families could visit, spend time with each other, relax, and restore what’s maybe been lost.

Currently, the Foundation is building a state of the art facility that will utilize smart technology to provide better accessibility.  In addition, there will be activities such as boating, swimming, fishing, spa treatments, massages, and more available.

In addition to providing resources, retreats, and support through his non-profit, Travis is active in sharing his personal story.  He speaks regularly around the nation and recently, published a book called Tough as They Come.

In the book, Mills goes into extensive detail about his struggles with returning home and how he got his life back on track.

Additionally, Mills’ story was turned into a documentary titled “Travis: A Soldier’s Story”.

At Rollx Vans, a worldwide leader in wheelchair vans for sale, we love sharing personal stories such as Travis’s so that others can be inspired by them.  If you’d like to learn more about Travis, his foundation, and how you can get involved, visit the official website here.

Click here to see a video of Travis sharing his story.