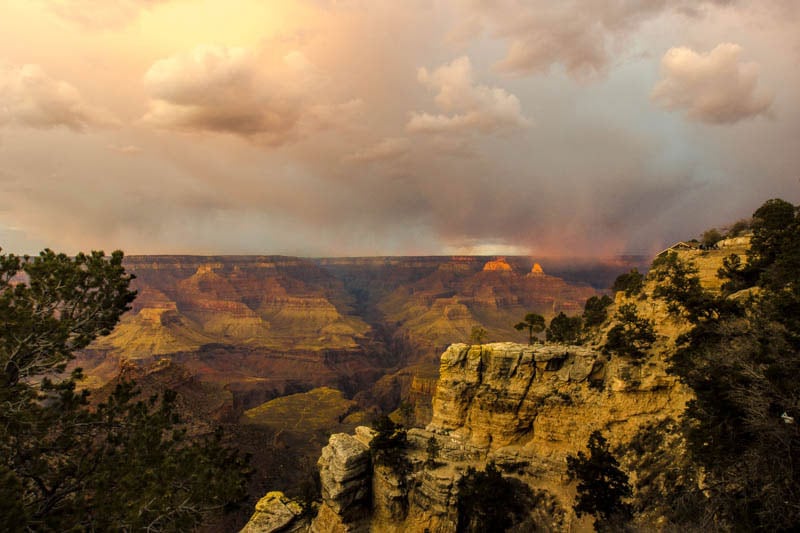 This is a Rollx Vans exclusive article provided by accessible travel author Candy B. Harrington.

At first glance the Grand Canyon seems rather an inaccessible destination; however, upon closer examination you’ll find that there’s actually a bounty of accessible trails, sites and attractions in this popular national park. And there’s no better way to enjoy it all, then to spend a few nights on the South Rim.

Not only are there a wide range of accessible properties on the South Rim, but they are also competitively priced with those in the gateway communities. According to Xanterra Parks & Resorts (the official concessionaire for lodging on the South Rim), the company is bound by National Parks Service rules for pricing rooms, and their prices must be comparable to similar offerings outside the park. So a double room on the South Rim costs about the same as a double room in a nearby town.

Yavapai East Lodge and Thunderbird Lodge are the most accessible properties on the South Rim, so here’s a rundown what you can expect to find in their accessible rooms.

Located on the canyon rim, Thunderbird Lodge was built in the 1960s, and the brick interior walls reflect the style of the era. This contemporary property is also the only property in the park that has wheelchair-accessible rooms with canyon views.

There is a sliding door to the accessible bathrooms, which feature a roll-in shower or a tub/shower combination. These rooms also include a hand-held showerhead, toilet and shower grab bars, a portable shower chair and a roll-under sink.

Yavapai East Lodge is located off the rim, in a small pine forest; however, it’s easily reached by the accessible park shuttle. The property is divided into east and west sections, and the east section has wheelchair-accessible rooms.

The registration desk is located in Market Plaza, which also boasts a restaurant, grocery store, post office and a delicatessen. There is level access to everything in Market Plaza, with accessible parking near the hotel lobby and in the main parking lot.

The accessible rooms at Yavapai East feature wide doorways with good pathway access. They are equipped with refrigerators and furnished with 26-inch high beds, with wheelchair-access to at least one side. Other access features include drapery wands, and automatic door openers.

The accessible bathrooms feature level access through a wide sliding door, and are equipped with a tub/shower combination or a roll-in shower. Other access features include a hand-held showerhead, toilet and shower grab bars, a portable shower bench, and a roll-under sink.

Accessible rooms at South Rim properties can only be reserved by calling Xanterra Central Reservations at (888) 297-2757. There are however a number of third-party Grand Canyon websites that claim they can reserve accessible rooms for a non-refundable reservation fee. A good rule of thumb is to steer clear of any company that charges a reservation fee, as they are not an official National Park concessionaire. Deal only with the official concessionaire for the best results.