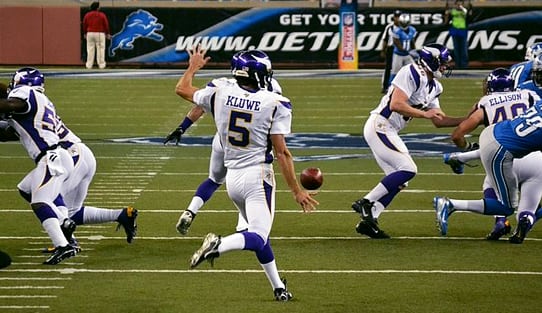 We’ve said it before, but there are a lot of ways to raise awareness.  You can run a marathon, walk a walkathon, or dance in a dance-a-thon.  But for Minnesota Vikings punter Chris Kluwe, the best way to raise awareness was to simply sit down.

A Day in the Life

We all see people in wheelchairs.  We see the handicap parking spots and the handicap doors.  Most of you on this site will even recognized handicap vehicles when you see them.  But for people with two fully functioning legs, do they really know what it’s like to be in a wheelchair with no ability to get out of it.

The answer is probably no.

So Chris Kluwe and filmmaker Matthew Rodreick set out to change that.  How?  By putting a professional athlete in a wheelchair for an entire day.  Then they turned it into a short film to raise both awareness and hopefully some funds for research.

“Chris Kluwe Rolls a Mile in Someone Else’s Wheels”

The film consists of a camera crew following around Chris Kluwe as he attempts to live an average day in a wheelchair.  The first realization that’s made is how inaccessible the home he’s in is.  From there you see him struggle with activities that would normally be considered simple.

Mixed into this footage are interviews with various people who have suffered spinal cord injuries.  Each person shares a bit about their life before and after.  Throughout the day Chris spends time with these people and gets to see the world from their perspective.

Chris is also physically walked through some of the therapy someone with a spinal cord injury might go through.  Finally he gets to put his athletic abilities to the test with an intense game of quad-rugby (affectionatly know as “murderball”)

For people who have no idea what it’s like to be in a wheelchair, the film is very eye opening.  If you’d like to check out the entire film (it’s a little over 20 minutes), you can view it by clicking here.  Otherwise there is a trailer at the bottom of the page.