What Could a Smart-Chair Do for Wheelchair Users? - Rollx Vans
Skip to content 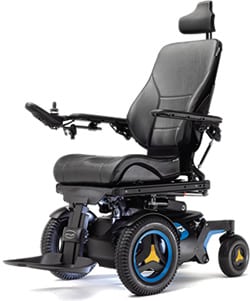 Smart technology changed everything we knew about phones.  What was once used for vocal interaction suddenly became the key to the world around you.  A person’s phone is their camera, their computer, their social life, and so much more.

Some carry out their entire jobs on their phone.

Now, a Swedish company called Permobil is partnering with AT&T to bring that same level of innovation to the wheelchair.  Based on what’s been shown so far, it could have just as radical of an impact for wheelchair users.

A smart device is defined as an electronic device, generally connected to other devices or networks via  via Bluetooth, NFC, WiFi, mobile network, etc. that can operate to some extent interactively and autonomously.

Permobil wanted to find an effective way to bring those capabilities to a wheelchair.  They started with their current top of the line chair, the F5.  The F5 is a premium electronic wheelchair that provides superior comfort and control.  It comes in both a standard seated version and the VS option that enables the user to raise into a stand posture.

To bring it to a new level, they started by adding a mobile data connection.  Their new chair (still in prototype) can connect to AT&T’s wireless network for internet use.  This of course allows for easily accessible internet browsing and phone calling abilities, whether through the user’s hands or via voice commands.

But it also provides some more specialized capabilities for the wheelchair user.  This new chair is designed to monitor vitals and even body posture of the user which can be transmitted via AT&T’s wireless network.

For people who are advised to sit in a specific fashion, the chair could potentially inform them if they are sitting correctly are not.   Also, thanks to the chairs having a spectrometer, it can tell if a person falls over in their chair and send out a call for help.

Lastly, Permobil is hoping to have the chairs communicate with remote maintenance office to keep them in working order.

As stated before, the chair is still in the prototype stage and more features could potentially be added before the final product is released.  Regardless, the current model is already quite capable, and we look forward to seeing it hit the mass market.  With technology like this, users could act as the navigation or look up useful information as they ride along in one of our van conversions.

What would you do with a smart wheelchair?  How might it change your day-to-day life?