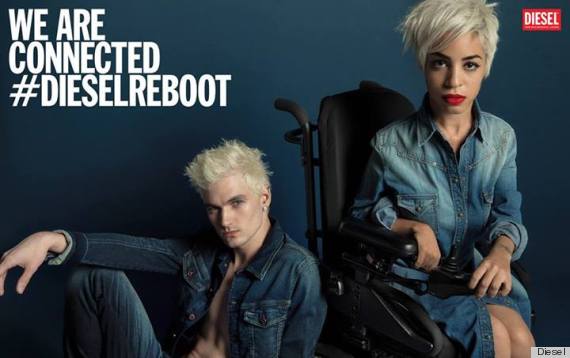 That’s what the fashion brand, Diesel, is touting in their spring 2014 fashion advertisements. And, that’s not all.

The new Diesel campaign follows the fall 2013 “modern-day rebels, heroes and just cool people” theme. The “we are connected” ads will feature 23 individuals that include a few conventional models, representatives of more than a dozen nations and an array of models with facial hair and tattoos.

According to campaign stylist Nicola Formichetti, the brand is looking to have their new ad campaign closely tie into their denim which has a rebellious attitude. Which explains why they’ve chosen many non-conventional models to represent this new campaign.

Mercado has been a wheelchair user since age 12, but has always had a love for fashion. While attending New York’s Fashion Institute of Technology as a fashion merchandising student, she landed her first internship with Allure magazine. As an intern she used her wheelchair to her advantage, using her lap to hold more garment bags than any other intern could do with just their hands.

And while her wheelchair makes it difficult for her to easily get from point A to point B in the fashion world, it does have its advantages. Mercado is often given a front row seat at fashion shows right next to A-list celebrities because the fashion week venues don’t often allow for much accessibility in the seating area.

In the end, this (along with her amazing levels of passion for the fashion world) helped Mercado become an influential fashion blogger, catching the eye of Diesel’s new campaign stylist and landing the role in the upcoming ad.

While some of the campaign’s ads are already viewable online, the campaign will officially launch in Vogue and Interview magazines in March! You can find out more about Jillian Mercado on her blog.

What do you think of Diesel’s new ad campaign? Is Jillian Mercado’s story inspirational to you? Why or why not?