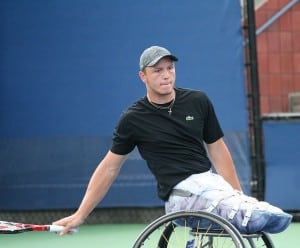 If you’re a tennis fan, you probably spent some part of the past two weeks watching Wimbledon.  No, we don’t mean the 2004 romantic comedy starring Paul Bettany and Kirsten Dunst.  We’re, of course, referring to what is generally considered the most prestigious tennis competition in the world.

One of the first big announcements to be made is that next year’s competition will, for the first time in its history, feature  wheelchair tennis singles events next year for both men and women.

It seems, though, that the athletes of wheelchair tennis are up to the challenge.

We’re excited to see how the event plays out next year, and you can be sure we’ll be talking about it here at Rollx Vans, your dealer and manufacturer of handicap vans in Illinois, Minnesota, and the rest of the US.

Regarding the wheelchair doubles events for this year, the winners were as follows:

Wheelchair tennis is an adapted sport played by people with disabilities in their lower bodies.  The game is largely similar to its original form.  The same sized courts, rackets, nets, and balls are used.  However, there is one notable difference:

In wheelchair tennis, the ball may bounce twice.

With the inclusion of Wimbledon, wheelchair tennis will be available for singles and doubles in all four Grand Slam events.  The Grand Slam tournaments are a series of four annual tennis events.

They consist of the Australian Open, the French Open, Wimbledon, and the US Open.

Known as the oldest tennis tournament in the world (and widely considered the most prestigious), The Championships, Wimbledon is an annual tennis tournament held in Wimbledon, London.
The tournament is ran by the All England Club and dates back to 1877.  As of 1988, it is the only major tennis event played on grass.

Did you catch Wimbledon this year?  What were some of your favorite moments?